China’s 12th Five-Year Plan, covering the period from 2011 to 2015, emphasizes a number of environmental issues to a degree not seen in previous plans. A KPMG report highlights three of the goals that will have a specific impact on the metals industry:

As with all statistics, the moment they are announced, those responsible for meeting the goals start devising ways of presenting the data in a way that shows they have met the targets, so don’t assume eventual claims of success will be the full story. However, the fact remains the metals industry (and its largest sector in particular, the steel industry) will be under considerable pressure to change in the coming years. China’s position as the world’s largest steel producer and consumer mean these changes will have far-reaching consequences for the global steel industry, including supply, competition and prices in Western markets.

The steel industry in China is facing a number of problems, largely brought about by rapid expansion. These have led to over-capacity, widespread pollution and a fragmented industry structure. As the report points out, the Chinese steel industry has grown at an average rate of 17 percent a year over the last ten years, reaching some 600 million tons of steel output last year, but with a capacity of between 720 and 750 million tons. So, high on the list of objectives is consolidation. Beijing will step up efforts to force mergers and acquisitions, particularly by state champions, to reduce the fragmented nature of the industry and achieve a level of control. 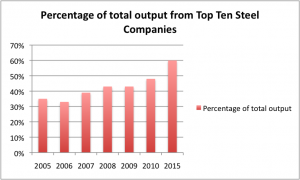 Much of the pollution and over-capacity is coming from the smaller to medium-size, lower-value steel producers, a product area in which Beijing recognizes China will be increasingly less competitive, as the currency gradually appreciates and wages rise. So the steel industry is expressly charged with upgrading technology to produce higher-value steel products. An SBB newsletter lists engineering steels, auto sheet and high tensile rebar as products categories that will receive favorable support, while the KPMG report lists specific steels in more detail:

Specific industries expected to drive demand for these steels are nuclear power, wind farms, energy savings for autos and hydroelectric power production facilities, but also ongoing developments of ports, shipbuilding, high-speed rail (in spite of the current problems), metro systems, coal mining, medical, construction equipment and of course the 36 million units of affordable housing Beijing is committed to building by 2015.

Property and infrastructure continue to be the largest drivers of steel demand in China as this pie chart shows. 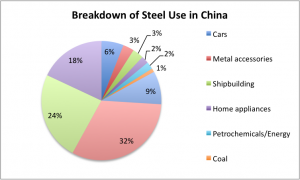 By bringing more steel production under the control of the top ten producers, Beijing expects to be able to direct investment not just in materials produced, but even in where steel plants will be constructed. Coastal regions have been identified for major new developments ostensibly to facilitate the continued import of iron ore and coking coal making the industry more competitive, reducing the environmental burden on traditional steel producing areas and providing access to water. But a benefit not mentioned in the plan is proximity to deepwater ports for exports. As China moves upstream technologically, Chinese mills will become a growing threat to Western and Japanese mills’ dominance of these higher-value steel product areas.