A draft of the European Commission study on joint Ëœeurobonds,’ reported by the Financial Times last week, makes the intriguing suggestion that gold could be used as collateral for fundraising by European states being priced out of the commercial market. The idea is that governments would use their physical gold holdings to underwrite if not all, then maybe the first 20 to 25 percent of the bond losses, making such gold-backed eurobonds considerably more attractive than current state-backed bonds.

Between them, the central banks of the eurozone hold some 10,792 metric tons of gold 6.5 percent of all the yellow metal that has ever been mined worth some $600 billion. Let’s be clear here; the suggestion is not that countries such as Greece or Italy should sell their gold — that would be illegal under the Maastricht Treaty and politically unacceptable in most cases — no, the suggestion is the gold is pledged to guarantee the first loss portion of bonds adding considerably to the security for any bondholder and, so the theory goes, justifying a much lower interest rate.

As the article points out, Italy’s central bank holds 2,451 tons of gold, worth about Ã¢â€šÂ¬100 billion. While that pales in comparison to its total debt stock of nearly Ã¢â€šÂ¬2 trillion, it could alleviate some of the short-term funding pressure. Italy needs to raise about Ã¢â€šÂ¬600 billion over the next three years. If it used gold as collateral for the first 20 percent of the new bonds, it could cover its needs until mid-2014.

There are plenty of precedents. Italy, for example, received a $2 billion bailout from the Bundesbank in 1974 and put up its gold as collateral while in 1991, India used its gold as collateral for a loan with the Bank of Japan; and Portugal, Brazil and Uruguay have all either sold gold or used their gold to support raising of funds in the past.

Likewise Greece has some 111.5 tons of gold currently worth about $5.4 billion, and using the “20% rule,” may allow borrowing of up to $27 billion. The problem with Greece is the real possibility the country could leave the Euro or experience widespread default; what value would be put on the bonds then? Older debts are looking at 50-percent haircuts. 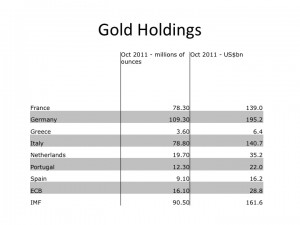 A report in the Guardian newspaper goes one step further: issue IMF bonds supported by gold, pledged from all the central banks. Leading gold holders such as the US, Germany, France, China, Switzerland, Russia, Japan, India and the European Central Bank, which hold the bulk of the world’s 988 million ounces, could allocate a proportion to form the core of a new crisis institution. The article suggests this new fund could issue gold-backed bonds to European and other nations as bridging finance whenever there is a threat of default.

The probability is Germany will pour cold water on this idea, just as they have all previous ones that don’t involve massive and immediate debt reduction and austerity programs (providing the austerity is outside Germany, that is). But we thought that after all of the hot air we hear about gold as a great investment, here at least is one good use to which those mountains of yellow metal can be put.