Well, here’s a turn-up for the books: the US steel industry is outperforming the rest of the world.

Good catch line, isn’t it? Happily for the US, it’s also true, says Reuters. The country’s production growth re-accelerated to 11.5 percent and is now running at a faster pace than China’s, where the year-on-year growth, while still healthy, has slowed to 9.7 percent over the last four months.

While China’s growth is still certainly positive growth, in Europe, the third major block along with North America and China, is starting to contract. October’s production of 15.27 million tons was said to be 1.1 percent lower than last year, with the region’s two largest steel producers Germany and Spain declining 4.2 percent and 6.3 percent, respectively. Japanese production has been running below year-earlier levels ever since the tsunami in March. So has Africa, largely put down to disruption in North Africa due to the Arab Spring uprisings.

Reuters tracked the global manufacturing PMI in the following chart to support the prediction that this was part of a downward trend and not likely to turn around anytime soon: 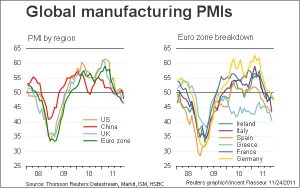 China is the least predictable going forward. US wider manufacturing, while patchy, is positive and there is no reason to expect US steel production to slow down, driven as it is more by strongly performing niche industrial applications like oil & gas, trucks and rail cars and ship construction than consumer demand.

Europe, on the other hand, is likely to continue its decline for some time to come. Even if the euro debt crisis is miraculously resolved next month, the economies of Europe have severe austerity measures to work through for many years, none of which are going to be very supportive for growth. Japan is struggling against a strong yen, but China will continue to be supported by construction of affordable housing and Beijing has the greatest latitude to loosen credit if the economy slows too much.

The US steel industry’s Goldilocks scenario may be a slowing China, taking the heat off iron ore, coking coal and steel scrap demand, thereby reducing global input costs, while a continuing recovery at home maintains demand and allows prices to reflect a decent return.