Commodity demand, namely for industrial metals such as copper and nickel, and their corresponding prices, has finally pushed Rio Tinto, HudBay Minerals and other companies to begin resurrecting long-slumbering mines, mine sites and mills in Michigan’s Upper Peninsula.

Once the center of North America’s copper operations in the 19th century, the “UP,” as it’s known, has suffered from economic depression long before downstate downturns (i.e. within Detroit’s auto sector) plunged Michigan into recession. Cliffs Natural Resources still operates iron ore mines in the UP centered near Ishpeming, but the peninsula’s famous copper mines are history.

According to a two-part article in the Detroit Free Press, countless JVs and established mining operations — including biggies like Rio — have spent the last decade prospecting, applying and receiving permits to mine for copper, nickel, gold, platinum and uranium. Mineral rights have been leased on over 1 million of the UP’s 7 million acres already, according to the article. 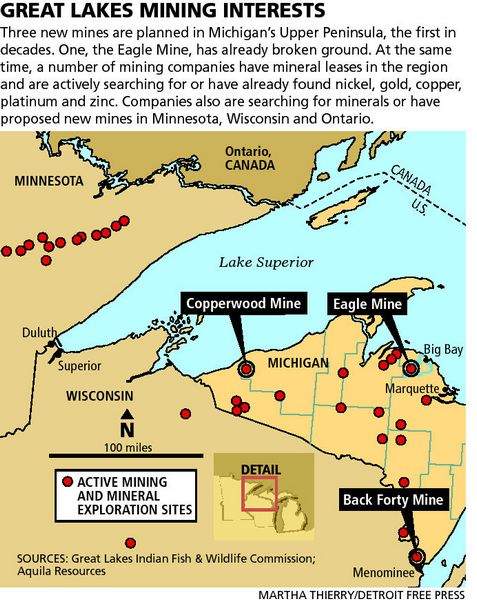 Rio, working through its wholly owned subsidiary Kennecott Eagle Minerals, is currently constructing the Eagle Mine outside Big Bay, which will be the US’ first primary nickel mine. Kennecott discovered the deposit in 2002, and should be extracting copper and nickel by 2014. Annually, the company expects a yield of about 16,000 tons of nickel and 10,000 tons of copper, according to their website — still a drop in the hat as far as total global production, but a significant move for domestic production boost.

Rio Tinto, via Kennecott, will also drop an $80 million to $100 million investment into reviving the defunct Humboldt Mill near the Eagle Mine into its original role as a crushing and processing plant.

About 700 total jobs between the three mines are planned, but the first round of those jobs wouldn’t come for at least a few years, and all the mines aren’t expected to produce metal ore beyond 12 years.

Also, the good fortunes hoped for by mining conglomerates, Michigan’s state coffers, new mine workers and the surrounding towns could backfire in other ways.