Home | Commodities | Nickel Market in a State of Rapid Change

Nickel Market in a State of Rapid Change

What a difference a quarter makes.

Back in September we wrote a piece entitled “The Role of Nickel Pig Iron in Refined Nickel Demand and Stainless Production Costs,” exploring the role of nickel pig iron (NPI) in the growth of Chinese stainless production. At the time, we observed nickel stocks were falling and with lower stainless production and weaker nickel prices we speculated the NPI production may slow towards the end of this year.

At the time, we could not have foreseen the collapse in prices. Most analysts were expecting NPI production to continue rising and nickel prices to stay north of $20,000 per ton through 2012. Indeed, HSBC was predicting a $22,000-per-ton average price for next year, but last week the LME price for primary nickel had fallen to $16,550 per ton as stocks finally began to reverse their falls and start to rise in response to surpluses. 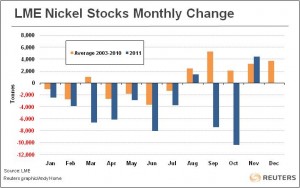 Andy Home in a Reuters article last week observed that market fundamentals are finally imposing their will and a culmination of rising supply from long-delayed mines and falling demand from a slowing stainless sector has resulted in a rapidly deteriorating price position for nickel.

Home advised that after years of delay and technical problems, the highest-profile HPAL (High Pressure Acid Leach) project, Goro in New Caledonia, is ready to start production exactly at the time of maximum price weakness. Compounding the problem, the Goro ramp-up will now coincide will the commissioning of the Ravensthorpe project in Australia and with the delayed start-up of the Ambatovy project in Madagascar. These new HPAL producers will join new ferronickel operations such as Anglo American’s Barro Alto and Vale’s Onca Puma. Both Brazilian projects are now building up run-rates just as rising stocks indicate demand is falling fast.

In China, another dynamic is in play, one that may in small part mitigate the rising supply situation. With nickel prices in the mid $16,000-per-ton region, many (if not all) Chinese NPI producers are losing money. Even for those stainless producers with captive NPI production, it is more economic to buy refined nickel than run their NPI facilities.

So it is no surprise to see nickel ore imports falling as NPI facilities are closed, as this graph from Reuters illustrates: 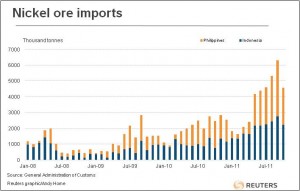 At the same time, imports of refined nickel have been rising. September’s imports were the year-high at 17,400 tons, only to be exceeded by October at 21,600 tons, the highest total since the re-stocking frenzy of July 2009. See graph below: 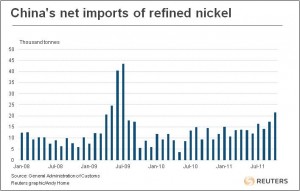 To what extent this is one-for-one replacement of NPI nickel tons by refined nickel tons is hard to say without access to more accurate data. The probability is some de-stocking has been going over the summer as the nickel price has fallen and consumers have held off buying more in anticipation of further falls. So some of the imports could be stock replenishment, some could be position taking, but most is probably hand-to-mouth buying as consumers may expect prices to fall further. Either way, Chinese demand is once again becoming a factor in global refined nickel prices and metal demand.