Home | Commodities | Platinum Looking Weak For Now, But Prices May Be Set to Rise Next Year

Platinum Looking Weak For Now, But Prices May Be Set to Rise Next Year

Although precious metals have suffered recent heavy falls, there is at least some evidence of price support for platinum and palladium next year, if not gold. (See our recent coverage of the palladium outlook.)

As these graphs of ETF holdings show, platinum and palladium prices have been falling during the last quarter, reflecting the markets’ oversupply position and slowing growth in Asia on top of the fear of recession in Europe: 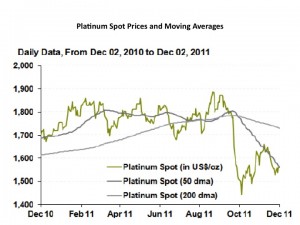 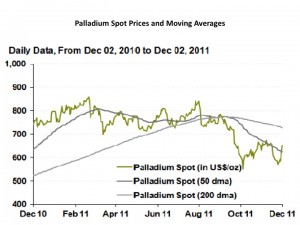 However, a Bloomberg report this week has a different story to tell.

Firstly, on the supply side, the story states supply will decline next year in both South Africa and Russia, which between them account for 88 percent of global supply. Quoting estimates by Barclays, this is due in part to rising costs; mining expenses are said to have risen 30 percent last year in South Africa and 13 percent in Russia. Anglo American is quoted as saying production costs could reach $1,573 per ounce this year, making some operations uneconomic.

Mining companies are paying more for wages and energy, at a time when they are digging deeper than ever to maintain production. With shafts extending down as much as 1.4 miles, temperatures at the rock face in South Africa can reach as high as 162 degrees Fahrenheit, requiring a hugely expensive cooling and support infrastructure. So platinum production has the potential to be constrained next year while demand from auto catalysts is forecast by Morgan Stanley to rise 17 percent to about 3.83 million ounces.

Indeed, the bank is not alone in its bullish outlook on the auto industry. Respected research company LMC Automotive is forecasting a record 79.5 million cars and light commercial vehicles in 2012, a 6.5 percent increase over this year. Carmakers in some markets have been performing strongly all year. Four of the six largest automakers in the U.S. beat analysts’ expectations in November, boosting industry sales to a 13.6-million seasonally adjusted annualized rate, the most in more than two years, New Jersey-based Autodata Corp. is quoted as saying.

The most accurate predictor of platinum prices over the last two years, Thorsten Proettel, an analyst at Landesbank Baden-Wuerttemberg in Stuttgart, Germany, observed the connection between rising demand and the current low prices compared to production costs. “The price is very low and very near production costsÂ¦we won’t have a global recession next year, emerging markets will still prosper, he said.

BNP Paribas agreed, saying “platinum’s supply outlook remains constrained, auto catalyst and industrial demand could rebound in the second half of 2012, when we expect economic growth to recover. Lonmin, the mining group, concurred, saying they did not expect the platinum price to move much in the first half of 2012, but prices could rebound strongly towards the latter part of next year.

The time to fix prices forward, as far as buyers are able, may come in the first half of 2012 when the wider economic situation becomes clearer, certainly as the chances of stabilization and growth for Europe and the reality of a soft landing materializes for China.