Steel plate mills operating here in the US appear to have gotten just a little bit more help from the International Trade Commission (ITC).

The ITC voted unanimously to essentially extend tariffs on imported steel plate from Korea, Indonesia and India. “Revoking the existing antidumping and countervailing duty orders on cut-to-length carbon-quality steel plate from India, Indonesia, and Korea would be likely to lead to continuation or recurrence of material injury within a reasonably foreseeable time, the ITC statement read.

Meanwhile, they voted to revoke the same tariffs for Italian and Japanese plate, citing less potential harm to US steel producers.

This decision comes on the heels of another unanimous vote — to keep tariffs intact for welded stainless steel pipe from Korea and Taiwan.

In the midst of a struggling domestic economy, where demand is low, American steel mills often say they need as much help as possible to combat unfair trade practices from other steel-exporting nations. In a press statement, Leo W. Gerard, president of the United Steelworkers, said, “five American steel producers operating plate mills in seven states and employing about 4,000 steelworkers were threatened if the duty orders were not kept in place.” These five mills are Arcelor Mittal’s US operations, Evraz Oregon Steel, Evraz Claymont, Nucor and SSAB Americas.

According to the ITC, less than 100,000 tons of steel plate were imported from these countries in 2010, a 90-percent reduction from the year prior to the filing of the petitions. That figure demonstrates the effectiveness of imposing these tariffs, according to the ITC.

Not only are producers being harmed by unfair dumping practices; the US Treasury may not be making as much money from the tariffs as it should be. In a time when tax policy is a one of the major hot-button issues, these extra funds could do their part in improving the government’s bottom line.

“This legislation Â¦ will ensure that Customs and Border Protection (CBP) uses its authority to collect the correct amount of AD/CVD [antidumping/countervailing duty] duties imposed by law and due to the U.S. Treasury.   Similar to the Senate bill (S. 1133), the legislation will also establish a process by which domestic producers can petition CBP to investigate claims of customs fraud and AD/CVD evasion and would require that CBP make preliminary and final determinations to be made public within a specific time-line.

According to MetalMiner IndX data, US steel plate prices have fallen off the past 30 days, starting off at $942 per short ton in early November, falling to an inter-month low of $925 on Nov. 21. The price currently stands at $926 per ton. 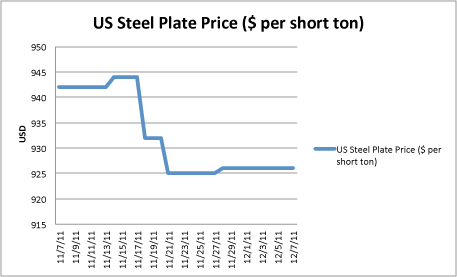