The change in the iron ore pricing mechanism most steel mills in China are now moving to monthly or even spot pricing has had an impact, as we explained in Part One. In addition, there are reports of disruption to Asian supply chains by Thailand flooding, particularly Japanese auto production having a knock-on impact on steel demand and hence iron ore purchasing.

Chinese sentiment has not been immune from the crisis in Europe; in part the fall in equities has been a recognition that Chinese companies’ exports to Europe will be hit by stagnation, if not outright recession, for some years to come. Finally, hedge funds have jumped on the bandwagon, buying short or put positions on the OTC market, signaling widespread expectations of further falls and depressing sentiment.

Sure enough, in the last couple of weeks, with access to re-negotiated contract prices and much lower spot prices, Chinese buyers have been back in the market and the price has bounced back 20 percent during November.

As this graph shows, the iron ore price has temporarily troughed before and bounced back, providing growth remains steady: 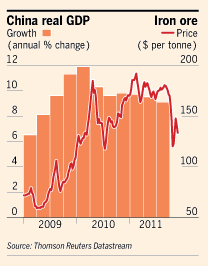 Chinese equities may have fallen for four weeks in a row, and China’s PMI did slip to 49 last month (indicating contraction), but if iron ore tells us anything, it is that economic systems adjust to accept shocks and that’s what we’re seeing in equities and the PMI.

In the longer term, China is estimated by HSBC to only be 50% urbanized, a position the US reached in 1920. The country will go through a further 10 years of construction to reach global norms, a target it is more than capable and wealthy enough to attain, and which will drive iron ore consumption for years to come.