Home | Environment | Fuels of the Future, According to Exxon Mobil – Part One

Fuels of the Future, According to Exxon Mobil – Part One

Exxon Mobil has released their annual “Outlook for Energy report, a 43-page survey of what the global energy market holds in store up to 2040.

With vast global reach in the energy market and more money at their disposal than many small countries, Exxon Mobil’s research is arguably as good as any bank or government research anywhere in the world. Best of all, it’s free, and for those of us in the metals markets, holds some interesting predictions that could have far-reaching effects on our industry.

Firstly, the report is based on the premise that the global economy will continue to grow, but at varying rates. The energy major sees OECD economies expanding by about 2 percent a year on average through 2040, as the United States, European nations and others gradually recover and return to sustained growth. Non-OECD economies will grow much faster, at almost 4.5 percent a year.

In large part this will be driven by demographics, as OECD countries and China will have static or falling populations by 2025, while India and Africa will continue to have rapidly growing populations with large numbers of workers in the productive labor force, as this graph shows: 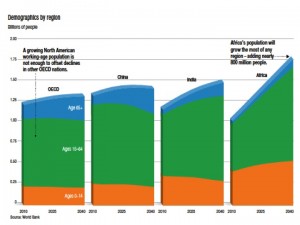 This economic growth and the improved living standards it enables will require more energy. Exxon Mobil expects global energy demand to be about 30 percent higher in 2040 than in 2010.

In turn, improved efficiencies and better energy management spurred by the cost of CO2 emissions will temper this rise in power demand. For example, GDP in OECD markets is expected to double by 2040, but this will be achieved while energy demand remains flat. The cost of CO2 emissions will be part of the driver to switch from coal to natural gas, but the lower cost of natural gas from non-traditional sources such as shale beds and the lower cost and greater energy efficiency of gas power electricity generating plants will also play a significant part.

Core to the firm’s prediction is that natural gas will become the second-most widely used source of energy in coming years, overtaking coal by 2025. Not only are natural gas plants cheaper to build, but they are very much more energy efficient than coal or even nuclear energy. According to the report a new turbine-powered coal or nuclear plant is about 40% efficient, meaning 60 percent of the energy released is lost, whereas gas-powered plants can be 60% efficient, contributing to their green credentials as well as cost of production.

PREVIOUS POST:
Is Rehypothecation a Systemic Risk or One-Off Occurrence? And Why Does It Matter to Metals Markets? Part One
NEXT POST:
Exxon Mobil's Energy Outlook Touts Oil, But Biomass and Nuclear Are Also Key – Part Two