So what do the steel price tea leaves tell us about pricing going into the New Year?

We can see that scrap prices appear fairly well supported and, according to the CORE report, 2011 scrap prices have been the least volatile since 2001. This suggests to us that raw material input costs, at least on the scrap side, remain well supported.

Iron ore prices, however, along with coking coal prices, have declined. The chart below depicts a slow price descent for coking coal within China (4%): 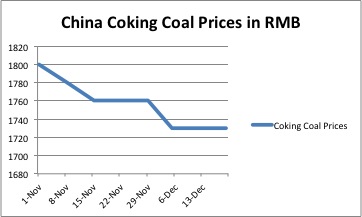 On the flip side, despite more optimistic industry sector performance (e.g. automotive, tractor and combine sales, industrial construction, manufacturing and industrial consumption), the European sovereign debt crisis and its impact on the global financial system as well as the European economy, combined with new US production capacity now on-stream, could put pressure on prices; so we remain a little less than enthused about a big price run-up throughout Q1 and into Q2.