What You (May Or May Not) Already Know

China controls more than 95 percent of total global rare earths production and effectively exercises its control on the end industries, forcing high-tech manufacturing into China. The Chinese government has been reducing the allocation of rare earth exports over the last five years.

The motive is to primarily dictate the price of rare earths in the international market and provide a competitive advantage to Chinese manufacturers due to upcoming projects outside China.

China has been trying to stop illegal mining since August 2011, and was successful in cracking down on a few illegal mining operations during the inspection carried out in November 2011.

They will soon introduce a special value-added tax invoice for the rare earth sector in order to further crack down on the illegal mining, smuggling and over-exploration of rare earths.

The Chinese government has only shortlisted 11 companies for exporting rare earths in 2012 when compared with 26 companies in 2011. 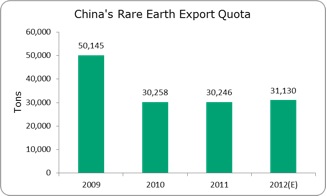 There had been a lot of speculation on whether China would reduce its export quota for 2012 in the final weeks of 2011. On the other hand, China was under pressure from the international community (the US, European Union, and Mexico filed a complaint with the World Trade Organization (WTO) against China) for violating global trade rules for coke, zinc and bauxite in 2011.

As a result, it forced China to dive back into past years’ data and trade rules before deciding on the export allocations for rare earths.