Home | Commodities | How Much Liquefied Natural Gas Should the US Export?
Commentary

How Much Liquefied Natural Gas Should the US Export?

Capitalism is a wonderful thing. It can create so much wealth, spur so much research and progress that we sometimes take on blind faith that unrestrained pursuit of profit is a good thing.

But large energy consumers in the US are asking the question: what is more beneficial — profit for the few or wider employment for the many? It’s not a new question and it is a balance on which societies are constantly having judgments on; but the recent fall in natural gas prices due to the development of shale gas has caused issues of this nature to be debated among business leaders and politicians anew.

The fall in natural gas prices due to shale gas development has meant US gas prices are below world prices, both a major boon for energy-dependent industries in the US and an opportunity for gas producers to develop overseas export markets for Liquefied Natural Gas (LNG).

An FT report says US gas prices are only about $3 per million British thermal units now, and a little over $5 in the forward market for 2017, making exports of LNG from the US to Asia and Europe look highly attractive.

As this graph from the EIA Annual Energy Outlook 2011 illustrates, shale gas is forecast to constitute up to half of future supply, but currently has added maybe 25-30 percent to total supplies: 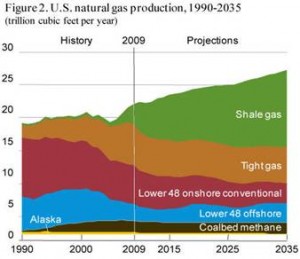 The US Department of Energy has received at least eight applications for the development of export LNG facilities, which combined have sought permission to ship 10.9 billion cubic feet per day to markets worldwide; that’s about 18 percent of US gas production.

Clearly by the time these plants are all fully operational â€“ assuming permission is granted â€“ shale gas supplies are projected to have increased further, but it does appear that at 18 percent of total US gas production, exports would deprive the domestic market of much of the additional supply shale gas has currently created.

Should I Stay Or Should I Go?

The fear for large energy users like Alcoa and US Steel is that gas (and therefore electricity prices) would rise again as the natural gas market became tighter if unrestrained exports were permitted. Those campaigning against unrestricted exports are not saying they should be totally banned; those given the go-ahead should obviously proceed, and possibly there is room for some of the balance; but they are suggesting a thorough review on a case-by-case basis with the backdrop of future US reserves, supply and prices taken into account.

So the debate centers on whether the US should be an exporter of raw materials/commodities such as natural gas, or use that low-cost resource to manufacture products with higher value-add. The argument that the US should not be in more polluting basic manufacturing activities does not hold water — simply shipping the production of those commodities offshore to places like China does not make the CO2 emitted any less or the process any more efficient; probably quite the opposite.

Supporters of LNG exports say the US has sufficient reserves (if all shale gas resources are exploited) to last for a hundred years at current rates of consumption. Others would say, what better gift to bequeath future generations than a low-carbon, low-cost, low-pollution energy resource?