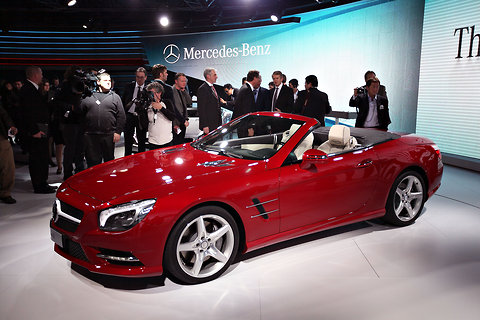 If you like cars — as I do — and if you like Mercedes — as I do — then you haven’t missed the latest about the new, nearly all-aluminum 2013 version of the SL line. Somewhat illogically, the top model (excluding the AMG line) is called the SL550 in the US and SL500 in Europe — although both have the same 4.7-liter engine.

Road & Track’s reports about the car being made in Bremen (to the contrary, all my German sources say that production of the new SL is moved to ‘Mercedes-Benz-Werk’ plant in Sindelfingen, with streets such as Gottlieb-Daimler Strasse, Rudolf-Diesel Strasse, and Benzstrasse running around or through the plant.

Up until the new model, MB has produced the SL in its Bremen plant, where the SL line has been built since the late 80s. (Well, the 1980s that is, since the Daimler name has been active in the automotive industry since the 1880s!)

MB cut its teeth on aluminum-car builds with the help of Magna — an Austro-Canadian outfit whose Austrian arm (Steyr) has been building the G-Class for Mercedes for the past 30 years, and built Mercedes’ gullwinged SLS supercar that came out in 2010. The SLS (named R197 — note the clear nod to the 50s car) is a low-volume build, probably not even one thousand units made per year.

Anyway, the new SL from Mercedes is the 6th generation, or the R231 in MB-speak, where ‘R’ stands for Roadster, and the number is the particular model series. The legendary originator of post-war MB racing fame, the gullwing 300SL from the 50s is part of MB’s W196 series (the ‘W’ stands for Wagen), since there was no Roadster designator at the time (and an open version of the 300SL didn’t come out until a few years later).

MB made the 300SL available through extra-special order with an all-aluminum body. Only 29 of the aluminum-bodied cars were built (all of them still remain; the last one resurfaced in a Santa Monica garage late last year), with restored versions currently fetching $1 million or more. Not that many W196 cars were ever made – including the open roadster version, which was the first-ever open SL; fewer than 3,300 were built over a 10-year period! By contrast, expect around 20,000 units of the new model (including all variations) to be built annually.

A more reasonable comparison would be with the new car’s predecessor, the R230, which weighed 300 lb (140 kg) more – in other words, with a ‘normal’-sized adult couple in the car, the new vehicle weighs about the same as the previous car did empty!

Thanks to nearly twice the horsepower of the old 300SL coming from a newly designed 4.7-liter twin-turbo version coupled with a seven-speed gearbox, the new model hits 60 mph in around 4.5 seconds, and tops out at 155 mph – which is actually about the same top speed as the old car. (Blame the electronic speed governors used by MB these days. Those limits can be raised or even removed so the car’s actual top speed is probably not too far away from 200 mph.)

For more on the SL’s aluminum body, check back in for Part Two…