Home | Commodities | What Will 2050 Look Like? – Economic Growth in Sub-Saharan Africa
Commentary

What Will 2050 Look Like? – Economic Growth in Sub-Saharan Africa

Other countries such as Bahrain, Qatar, and the United Arab Emirates should achieve high growth rates in non-energy sectors of their economies, but will gradually lose the distorting effects of current high per capita oil & gas revenue income.

The extent to which those countries experiencing high population growth can create sustainable, non-energy dependent economies will be a major challenge for the region, and for some the source of continuing long-term social unrest. 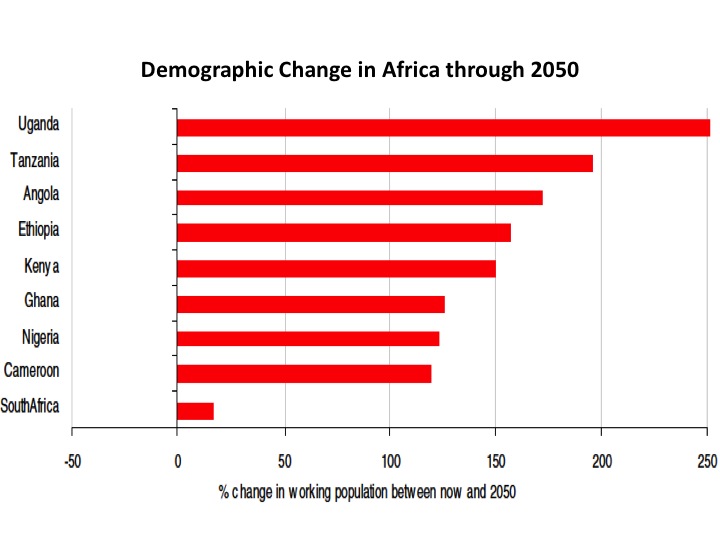 Farther south, Africa holds the greatest hope of achieving rapid growth if it can overcome problems of education, democracy and corruption.

HSBC singles out Tanzania, Ethiopia, Kenya, Uganda and Ghana as those likely to grow fastest in spite of them currently showing (on the whole) appalling levels of education, life expectancy, rule of law and (with the exception of Ghana) democracy, largely because they are starting from such a low base.

Some, such as Nigeria and Angola, have phenomenally high rates of fertility, which as we mentioned in Part One, will see Nigeria with a population nearly the size of the US by 2050, coupled with oil and gas resources holding out considerable potential for growth â€“ if there is the political will to control corruption and to invest in infrastructure such as electricity supply.

The Economic Intelligence Unit (EIU) agrees, predicting sub-Saharan growth — mostly fueled by capital inflows from Asia seeking commodities — to be strong from 2013 onwards and generating 5 percent average growth rates. Nigeria has the potential to become the richest and most populous state in Africa, leaving previously more developed South Africa behind. Exactly how it will achieve this will be fascinating to watch, but it certainly holds enormous potential.

Closer to home, we will next look at the prospects for the mature economies in South America and Asia in the fourth and final post of this series.