Home | Commodities | What Will 2050 Look Like? – GDP Growth and Education
Commentary

Building on our previous article — crystal ball-gazing towards the middle of the century with the help of HSBC’s “The World in 2050” — we should repeat the caveat that this is not intended, neither by us here nor by HSBC in the original report, to be a hard and fast prediction.

It can’t be — there are just too many political, social and natural variables at stake! However, by picking certain key drivers such as demographics and extrapolating current trends, the report makes some interesting predictions on how the global economic model may evolve, and leaves it up to readers to overlay their own judgments and bias.

One key driver that the bank uses is population growth and, more specifically, growth in working age population relative to total population.

In itself, a rising population does not necessarily create greater economic wealth, but it does create a rising pool of workers, a larger internal consumption market and a wider base over which to spread social costs of health care, education, etc.

On top of this, the researchers have weighted certain other (varying) contributing factors to economic development. The first is GDP per capita, with the rationale that those coming from a low base have more catch-up potential in a globalizing world than those already at the top of the scale.

The second is the crucial measure of average time spent in schooling. Regions such as Africa, apart from problems of corruption and rule of law, are held back by poor schooling, creating a workforce unable to meet the needs of a modern economy. Life expectancy establishes where on the scale a country is in terms of development, and fertility the potential for growth in working-age population.

Further measures are the Rule of Law and the Democracy Index; more on those below. Lastly, measures of consumption by government and the rate of inflation are taken to judge the state’s role in the economy and how well managed the economic levers are likely to be in future years.

Before you object, yes, some countries like China have achieved phenomenal growth without the last condition; but China is a work in progress, and — at least in the business sphere — mimics some of the features of a democratic environment.

Interestingly, no weighting is given to the natural resources with which a country is blessed, and yet in many cases we would argue the starting point from which some of these countries are being assessed is precisely because of their natural resources.

Many Middle Eastern countries, for example, are starting from a very high per capita income solely because of oil and gas production; to extrapolate forward on the assumption that those commodities’ supplies are unlimited is dangerous. The degree to which countries like Saudi Arabia can convert their energy wealth into industrial production or globally competitive services in coming years will be a major variable in predictions of their future success.

As a result, energy-rich countries like Qatar will struggle to show fast growth in per capita or gross GDP because they are already at a high level, even though that wealth is very narrowly reliant on hydrocarbons. 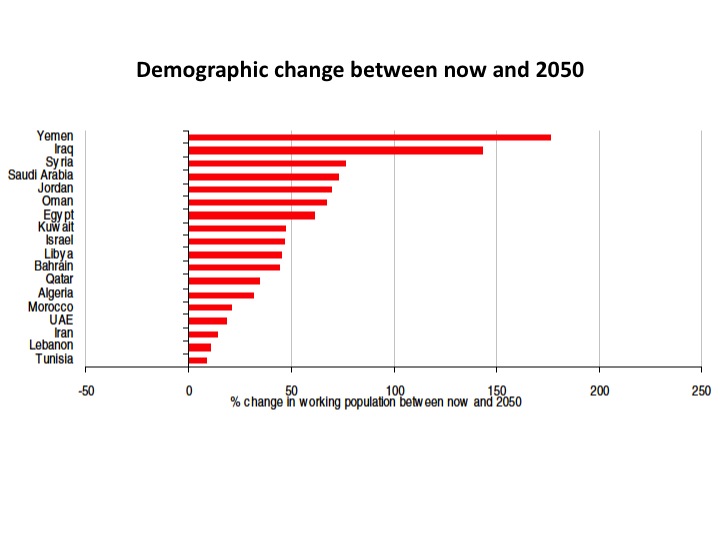 Relatively speaking, HSBC sees fastest growth in GDP for Algeria, Egypt, Saudi Arabia and Jordan, because they will benefit from better economic infrastructure in terms of education and so on, current unrest notwithstanding (even though, as the graph above shows, they are predicted not to have quite as high population growth as some other states).

Read more on the predictions for the Middle East and sub-Saharan Africa in the upcoming Part Three.

PREVIOUS POST:
Mercedes SL or a Prius: Which Is Greener? – Part Two
NEXT POST:
Is Copper Set to Test $10,000 Again As LME Stocks Shrink?