Taking a first pass over the World Bureau of Metal Statistics’ monthly bulletin report on 2011 production, consumption and inventory up to the end of November, one could be excused for thinking the tin market was operating in a comfortable surplus and the sell-off seen in 2011 is a reflection of a market in oversupply. 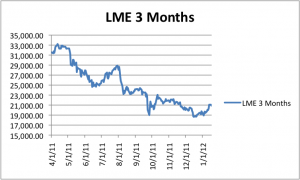 The WBMS reported this week that the tin market recorded a surplus of 0.8 kt during the first 11 months of 2011, in part aided by a 21 percent drop in Japanese consumption following disruption caused by the tsunami, but after accommodating an 18.7 percent increase in Chinese consumption. All in all, not cause for concern that prices could surprise on the upside this year.

While the WBMS data is no doubt entirely accurate, the reality is that much more has been going on in the tin market than the numbers alone show, and a recent Bloomberg article suggests this coming year could see substantial price rises.

Part of the decline in price last year has been, along with much of the metals sector, a risk-averse attitude towards prices from investors due to the European debt crisis and fear of a European recession, if not global slowdown. Of particular concern was a repeat of the slowdown in demand for electronic goods seen in 2009: electronic goods such as mobile phones, TVs and laptops make up a significant part of solder demand, 50 percent of the end-use for tin.

However, although Europe does look destined for a period of stagnation, if not recession, demand remains strong in Asia. Consumer confidence in North America is positive, and the sale of consumer electronics is forecast to exceed US $1 trillion for the first time, just as tin stocks hit a 33-month low.

On the back of falling inventories, we have falling ore grades. PT Timah, Indonesia’s biggest producer, gets an average of 200 grams of tin from every cubic meter (35 cubic feet) of ore today, about 63 percent less than two decades ago, and grades are continuing to fall. Nor is the largest producing country doing any better; Reuters reported this week that power limitations in Yunnan province have been hitting tin production, contributing to the 4.9 percent rise in Chinese production and falling short of the 10%+ rise in demand.

Most analysts polled by Bloomberg expect demand to outstrip supply this year and prices to rise, with a median forecast of $26,000 per ton — a 20 percent rise from this week’s sub-$21,000 price level. Downside risks are a further escalation of the European debt crisis (possible), a harder than expected landing in China (unlikely), or a slowdown in the rate of recovery in North America (unlikely, based on current estimates).

So maybe investors were right to focus on Europe as the situation there deteriorated last year; for tin buyers, though, today’s prices may look good in six months’ time.