I love when people forward me fun metals stories like this one, noting fashion designer Jean Paul Gaultier announced his product debut in the metals industry with a designer-embossed, one-ounce gold bar.

According to a couple of press accounts, Gaultier, through his distributor, Dillon Gage Metals, appears to have commanded a 10 percent premium along with a $25 handling fee for his version of a hedge against inflation.â€ After my initial gut reaction (my mumblings included the words rip-offâ€ and ridiculousâ€), I thought perhaps a case could be made for the bars, but I’d say they make little to no sense for several reasons. 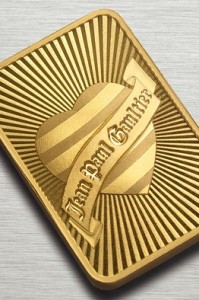 The first reason not to buy said designerâ€ item involves the premium itself â€“ 10 percent. So let’s see if we get this rightâ€¦Gaultier designs this gold bar in a CAD/CAM file. He puts in, say, 20 minutes of his time (okay, that might be harsh, let’s say 10 hours of design time). Now, granted that design probably represents the most valuable portion of his value-add,â€ with his brand of course making up the rest (and we will comment on that momentarily).

Gaultier (or rather his people) forward the design to several tool and die makers. Given the state of the European metals markets right now, he gets some fabulous quotes and settles on a supplier who quotes him 500 euros. Next, the Gaultier team identifies suitable stampers equipped to handle substrates such as gold, bids and vets his suppliers (negotiates a conversion cost) and identifies the appropriate raw material supply chain (for all we know quite possibly his own personal inventory from an ETF).

We’d look at the gold bar as a pass-throughâ€ (from a cost perspective), so the question becomes the value of the brand.â€ Certainly a limited, one-time, small production run would change the underlying economics of this product debut, as the intrinsic value would increase because of its limited supply.

However, if Gaultier is thinking Tiffany or DeBeers, he’s betting that people would actually place a value to his name and brand on the gold bar (hence my initial reaction of â€˜rip-off and ridiculous’). Alas, I own a few Tiffany products and know that I am paying a premium for the design of a finished product, not the branding that goes on top of a true commodity such as a metal or gemstone.

Playing on people’s fears often makes good business sense (e.g. fashion hedging instrument), so why should I knock this innovation? I am reminded of something I once asked my cousin of a Rothko painting: Why should he be in a museum for painting a white canvas?â€ My cousin replied, because he did it and you didn’t.â€

PREVIOUS POST:
The Big Mac Index: A Commodity Bellwether for Steel Buyers?
NEXT POST:
Ahead of South Carolina Primary Election, A Legislative Outlook on 'Buy America'