Even though Eastman Kodak has declared bankruptcy, there is just enough industrial demand being mustered in the solar panel, battery and conductor sectors, not to mention investment in ETFs and physical metal, to give the silver price its best start in a new year since 1983.

According to a recent article in Bloomberg BusinessWeek, silver as a commodity is back in business. The silver price hit $33.8575 yesterday (up 22 percent since Dec. 31), and a survey of analysts points to a price average of $37.50. Silver is notorious for its volatility, and indeed proved the most volatile metal tracked by Bloomberg over the last eight months, dropping 44 percent over that time period.

Manufacturers on a Slow Rebound

Eastman Kodak and other photographic film manufacturers used to account for a good percentage of silver demand, but that has “slid at least 66 percent in the past decade,” according to estimates by the Silver Institute. (Kodak announced that it would stop producing Kodachrome film in 2009.)

But a mix of increased industrial usage (global solar-panel installations increased capacity by 70 percent last year, and Barclays Capital estimates manufacturers to use 15,415 tons of silver this year, up 2.5 percent from 2011) and physical investment (196 tons added to ETP holdings this month, and 189 tons of American Eagle silver coins bought) has definitely buoyed the silver price.

However, will silver’s bullish performance last?

While analysts at Standard Chartered Bank and others sound positive on silver’s upswing in the short term, a few others are saying no. (Silver is still relatively cheap compared to gold, with the gold/silver ratio at 51.5, down from 57.4 in December, according to Bloomberg): 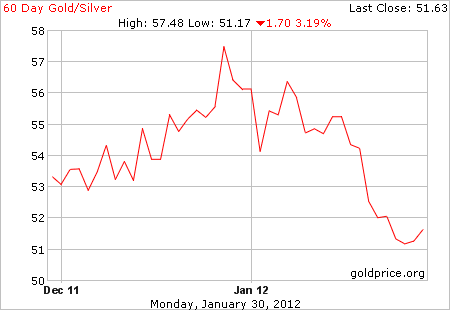 Larry Edelson, writing in ETF Daily News recently, made clear his view that precious metal markets, including silver, are headed down. The way he sees it, “in silver, we would need to see a daily close above $35.79 followed by a close above $37.79 on a Friday closing basis to turn silver’s intermediate-term trend back to bullish. Short of those signals, silver remains in a position to plummet yet again.”

Underpinning all of this, there is the whole Eurozone debacle, and the flailing Euro economy may still be the biggest roadblock to unfettered silver price growth. The Bloomberg article cites the IMF recently lowering its growth forecast from 4 percent to 3.3 percent as the main indication that these macro problems could cause trouble in this commodity market.

Edelson mentions the Eurozone crisis could mean better news for the US dollar than for gold or silver, as European debts will send capital more directly to the dollar.

Ultimately, to have silver break out of its mid-$30s range, we’d need a double-edged recovery in the Eurozone and an increase in worldwide manufacturing demand (developing and emerging economies must get back into stable-enough positions to buy more solar panels and plasma TVs) — otherwise, the silver bears may just have a point.