We all know a thing or two about news that’s not really news (or, to put it more accurately, news that’s overblown) — and this phenomenon seems to happen in the realm of rare earth metals more than anywhere else.

Reporting on rare earth metals is such a hot commodity in and of itself that the hot commodity — rare earths, in this case — and the global activity surrounding it gets a bit more attention than it should. (See our recent post on an overblown rare earths story, and what leading rare earths expert Gareth Hatch had to say about it.)

The same holds true for the recent World Trade Organization (WTO) ruling against China, in which it found that China must lift export restrictions on certain raw materials. A few headlines in the mainstream media on the ruling zeroed in on the implications for rare earths restrictions, and not a single article failed to mention what those implications were.

As Robert Oak wrote in the Economic Populist: “While people rejoice and believe this ruling implies China will have to remove export restrictions on rare earth minerals, au contraire, it’s not so.” He may be right. As the graph below shows, China’s iron grip on rare earths is not likely to subside. 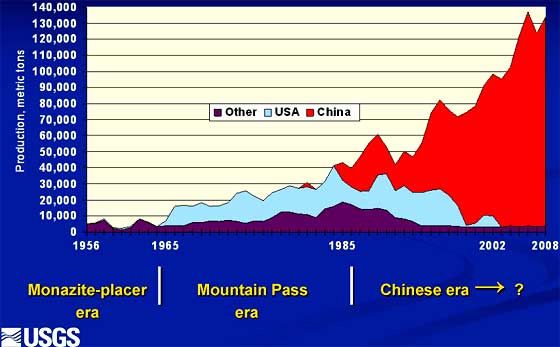 Source: USGS via The Economic Populist

So let’s focus on the actual center of this ruling; more specifically, on the materials and industries. The American Iron and Steel Institute (AISI), the Steel Manufacturers Association, the Specialty Steel Industry of North America, the Committee on Pipe and Tube Imports, and the United Steelworkers all hopped on board the praise-the-ruling train, since the domestic steel industry has arguably more at stake here than those that source rare earth metals for their products.

The steel and chemicals industries depend, to varying degrees, on bauxite, coke, fluorspar, magnesium, manganese, silicon carbide, silicon metal, yellow phosphorus and zinc — the raw materials covered by the WTO appellate ruling. Domestic steel producers are mostly grateful for a favorable outcome, but they also know the Chinese aren’t just going to flick the switch and play super nice.

Jennifer Diggins, director of public affairs for Nucor Corp., weighed in on the news. “We very much welcome the decision and thank USTR for its critical role in the process,” Diggins said in an email. “This is an important decision and reminds our trading partners that barriers to exports will not be tolerated.”

Nucor has been at the forefront of the industry as far as advocating for trade fairness between the US, China and other nations.

Diggins, among other leaders in the domestic steel industry, will be speaking at our upcoming conference, Commodity Edge: Sourcing Intelligence for a New Normal. (Click below for more info…)