A report in the FT notes the Chinese manufacturing sector has made a surprisingly strong start to the year, as the purchasing managers index (PMI), an important gauge of factory growth, rose to 50.5 in January from 50.3 a month earlier.

The result helped underpin recent strength in metals prices, Standard Bank wrote in a note to investors last week, advising that both gold and silver have had the best start to the year since the 1980s, while base metals have seen the strongest performance during a January for at least the last four years.

A combination of some perceived improvements in the European debt crisis, a weakening dollar and the above official China PMI numbers have revived risk appetite for metals. But buyers will be asking themselves, is this euphoria likely to persevere through the first half of the year — or could it be overdone?

What the PMI Tells Us 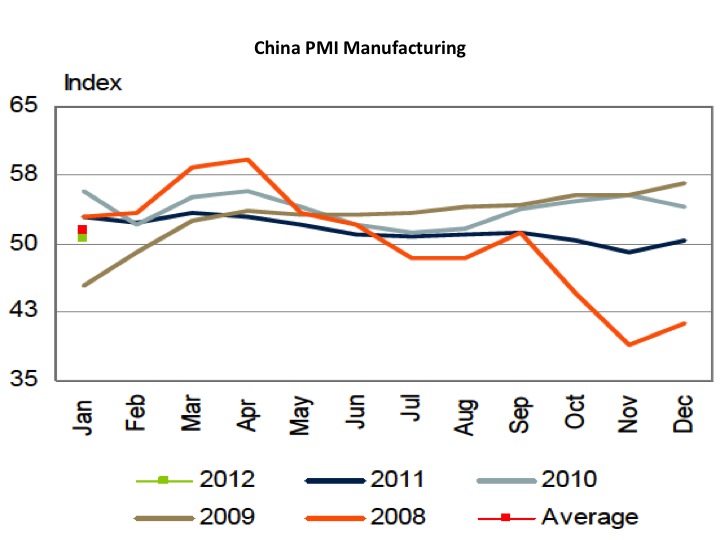 Back to those PMI numbers; on closer inspection, the bank advises the improvement was driven mainly by increases in import prices and raw material inventories, with output and new orders relatively flat and new export orders falling sharply. Yes, the early Lunar New Year celebrations might have dragged the January figure down, but slowing growth in Chinese electricity production points to slower manufacturing activity.

In addition, construction growth in China, which has been a big source of demand for copper, aluminum and zinc, continues to decline. Nor will credit loosening by the PBOC make a material difference in the short term; the preferred move by the central bank seems to be reducing reserve requirements, which has a minimal and delayed impact on metals demand.

Warning! Profits May Be Smaller Than They Appear

In the same week, a Reuters report lists profit warnings issued by major Chinese metals manufacturers; firms in Hong Kong and China are required to warn the market in advance if they expect sharp swings.

Baosteel said profits fell by over 40 percent last year due to a downturn in demand from the property market. Metallurgical Corp. of China said profits will slide 20-30 percent due to both the slowdown and problems at a zinc refinery. Angang Steel announced Monday it expected to record a net loss of around $347 million for 2011, yet at the same time some sectors are doing rather well – SAIC Motor Corp. forecast a profit rise of 40 percent for 2011, while manufacturers of heavy industrial equipment have also done well.

Economists, though, expect China’s manufacturing sector as a whole to have contracted in January and Linus Yip, chief strategist at First Shanghai Securities, is quoted as saying, “The worst is yet to come,” for company results, as metals demand shrinks and costs continue to rise.

A little farther afield, the WSJ is cited by the FT, saying industrial activity in the region remains hampered by the global slowdown and Europe’s sovereign debt crisis. South Korea recorded its first monthly trade deficit in two years, as exports in January fell 6.6 percent from a year earlier, while HSBC’s PMIs for Taiwan and South Korea also showed manufacturing continuing to contract there, though less severely than in December.

Europe, with the exception of Germany, is expected to be in recession for much of the first half, and the US recovery is patchy. So for now, one has to ask where this metal demand is coming from that justifies metals price rises. Standard Bank, for one, is taking the view that there will be an adjustment during the first quarter.

Keep an eye on those Asia PMIs and electricity demand — both are good indicators of what’s in store.