In a recent interview by Reuters, I said I did not see other non-ferrous metals facing significant closures by Western producers as we have in aluminum. (Reuters was exploring the idea that smelters closures by Alcoa in particular, but also Rio Tinto and Norsk Hydro, were likely to be just the start of a much more intensive program, and whether the trend would cut cross other metals groups.)

My position, and Reuters’ conclusion, was that we weren’t seeing the start of massive smelter closures as much as a simple migration of capacity from higher-cost mature markets to lower-power-cost developing markets like the Middle East; as such, it was unlikely to be the start of a widespread trend among all metals.

However, as we may have said before, ferrochrome is all about power, and results for ferrochrome producers in different locations may point to a trend that could develop for that material in a similar way to aluminum.

Ferrochrome, the stainless steel additive, is a power-hungry product requiring huge amounts of electricity in electric arc furnaces to melt chrome-iron oxide ores into ferrochrome at 2,800 degrees Celsius. Historically, South Africa has enjoyed relatively low power costs. Quoting South African producer Merafe, the texreport says the country was paying US $0.06 per KwHr in 2010 (compared to $0.04 in Kazakhstan, $0.085 in China and $0.09 in India), but that expected power cost increases by Eskom, South Africa’s near-monopoly power producer, could lift that to $0.135 by 2015, compared to comparable levels in China, but still just $0.05 to $0.06 in Kazakhstan. 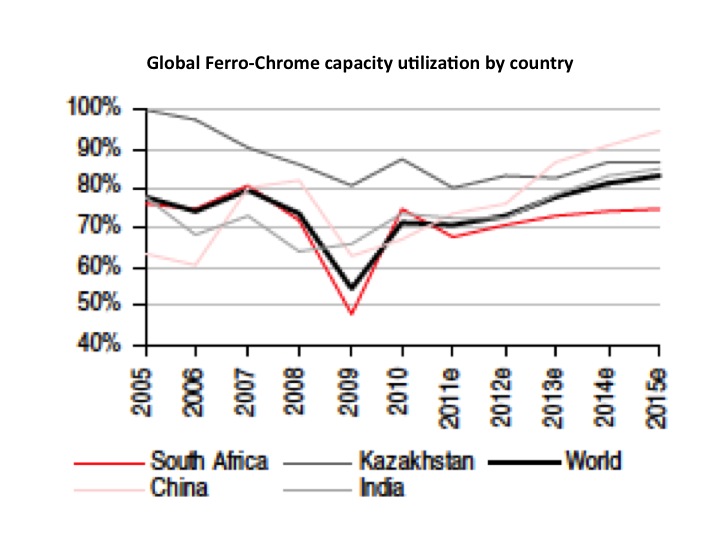 So a Reuters report this week noting that the Kazakh mining group ENRC was expecting to be operating at full capacity of some 400,000 tons this year (after some emergency repairs dented production in late 2011) should come as no surprise.

At the same time, South Africa’s Merafe reported a ferrochrome production decline to 263,000 tons, with capacity utilization reduced to 65% for 2011 and production volumes 12 percent lower than in 2010 — even as global stainless production hit an all time high at the start of 2011.

With expectations of a 25 percent power rate increase likely to be introduced by Eskom in April, we could see the start of a gradual decline in South Africa’s domination of the ferrochrome market, a process that arguably has been in motion for years, but which could accelerate if, as expected by HSBC, China begins to ramp up domestic ferrochrome production and import chromite ore. The bank expects China’s share of global ferrochrome production to rise from 24 percent today to 32 percent by 2015. 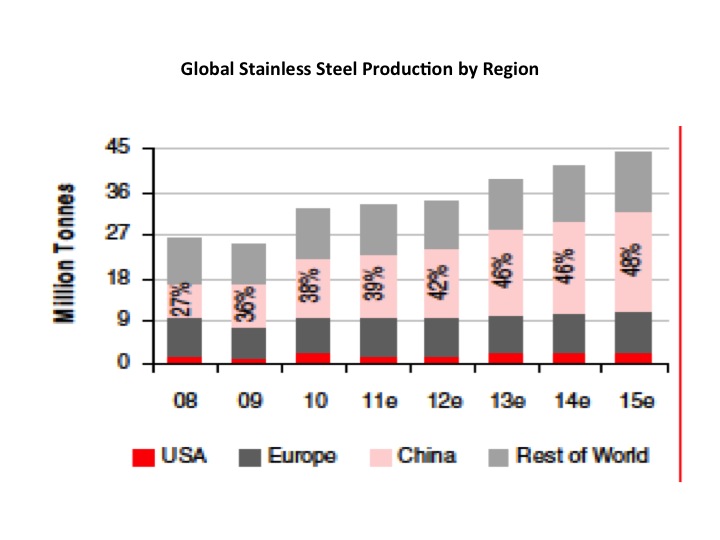 Ferrochrome prices have fallen during 2011, from around $1.25 per pound in Q1 2011 to $1.15 per pound this quarter, but rising power costs, particularly in South Africa, will probably put a floor under the market and support current levels, as any further deterioration will see (especially South African) capacity idled.