My colleague Stuart wrote a piece published today about the nickel market, specifically that it remains in oversupply. The ensuing discussion came about just as I had intended to put the finishing touches on a presentation providing an outlook on the steel and stainless market (and realizing we better have something intelligent to say to explain the $5000 per ton increase in nickel prices since December).

Stuart and I both agree nickel faces an oversupply situation. And we both agree that the world is awash with stainless capacity. Where our opinions may differ lies in our interpretation of the demand signals. Though China remains the 800-pound stainless gorilla (in production and consumption), the US market has more than a faint pulse. In fact, based on my own [anecdotal] conversations with US manufacturers, I typically hear the following with regard to demand: “We’re having a good year…not quite a 2007 year, but a good year.” Others echoed this sentiment and even the distributors and producers share similar opinions. Will that drive stainless prices higher? We can’t say for sure, but stainless steel does have a few things going for it.

Look at the Raw Materials

Stainless steel shares several raw materials with steel – iron ore, coking coal and scrap. How do the markets for these materials look? Flat to lower, lower and higher. Okay, more explicitly, though iron ore hasn’t reached its 2008 highs, even at $140 per ton it remains comparatively high — substantially higher than the days of $60-per-ton iron ore. Take a look at coking coal: 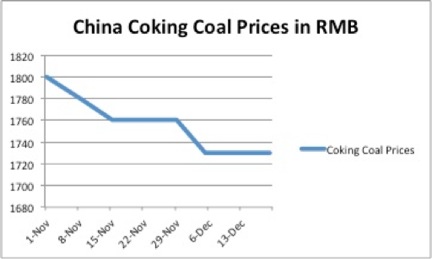 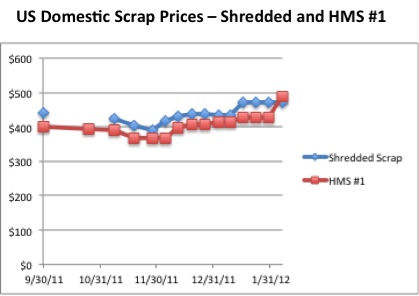 We haven’t seen anyone call for serious price drops for any of these three steel raw materials. So let’s move onto what drives stainless markets. 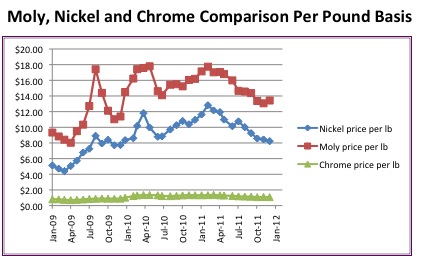 Clearly, once we add January nickel data into the equation, we can see two raw materials trending upward. And don’t get too excited by flat-line chrome; check out this chart from HSBC: 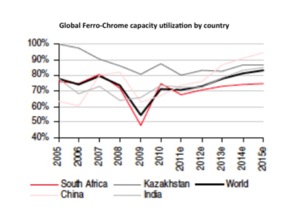 “So what?” you say? In another recent piece Stuart wrote, he quoted South African producer Merafe: “The texreport says the country was paying US $0.06 per KwHr in 2010 (compared to $0.04 in Kazakhstan, $0.085 in China and $0.09 in India), but that expected power cost increases by Eskom, South Africa’s near-monopoly power producer, could lift that to $0.135 by 2015, compared to comparable levels in China, but still just $0.05 to $0.06 in Kazakhstan.” Somehow we don’t think Borat secured additional ferrochrome supply back when he made his hit film! (Not so “verry naaice!”)

So at a minimum, one has to consider a slightly bullish case for ferrochrome; perhaps not in the immediate term, but certainly in the middle to longer term. That leaves us with our friend nickel, as Stuart has aptly described.

How does one examine what has really happened in the stainless market? Look no further than the surcharges? Roller-coaster ride, anyone? 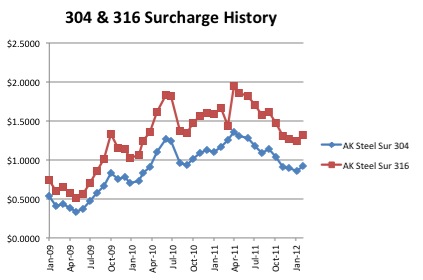 Surcharges, however, follow what the mills see in the market and therefore to some extent, they appear as lagging indicators. Allegheny Ludlum, in a recent earnings announcement, indicated they felt that raw materials face less volatility in 2012 when compared to the recent past. We’ll see if that translates to lower surcharges. My read of the raw material price trends suggests a mixed bag.

We haven’t touched on stainless capacity (that pretty much everyone agrees remains in oversupply both globally as well as in the US). With several announced re-starts — I have read analyst reports indicating as much as 5 percent of US capacity will come on-line in 2012 — one could easily conclude prices will drop.

That leaves us with the demand side of the equation, which we’ll tackle in a follow-up post.