Maybe it would be unkind to suggest Boeing will be reading the developing story of Airbus’ A380 wing-crack problems with glee — all airlines suffer issues of this type at some time — but rarely has Boeing and Airbus’ rivalry been so intense, or the counter claims of government subsidies been so bitter. Nevertheless, Airbus has moved swiftly to minimize the PR damage, ensuring plenty of information was made available regarding the nature, extent and solution to the cracking issue.

For anyone not following the unfolding events, it started back in November when the Rolls Royce engine on a Qantas A380 failed rather spectacularly in mid-flight, sending shrapnel through the wings. According to the Telegraph, subsequent inspections during the repair process showed the presence of tiny cracks in an L-shaped bracket that connects the wing’s exterior to the internal “rib” structure.

Last month the European Aviation Safety Agency (EASA) ordered checks on 20 of the most heavily used A380s. Those checks showed the problem was more widespread, also affecting the other end of the bracket, which has vertical flanges that connect to the wing spar, prompting EASA to order all 68 A380s in service to undergo detailed inspection using high-frequency electric currents over the next few weeks.

There is no suggestion the planes are not safe to fly, and Airbus has stated the parts in question are not main load-bearing components; nevertheless, they can do without bad press on an aircraft that cost nearly $20 billion to bring to market and is not expected to make a profit before mid-decade. 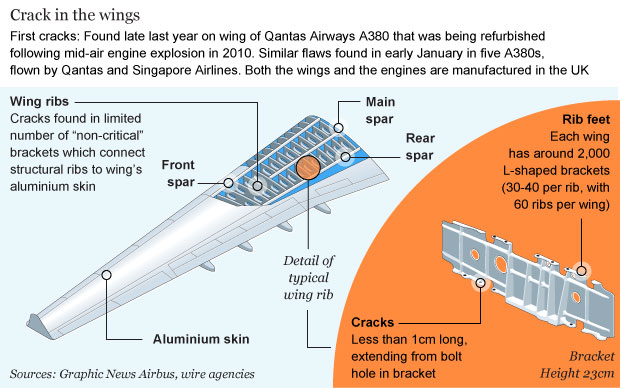 So what exactly is the problem?

Well, the cracks, some of which are up to 2 centimeters in length (nearly 1 inch), seem to be limited to both the upper and lower edges of the brackets that connect the external skin to the central spars. The brackets have L-shaped feet, and it is at the point of connection between these feet and the skin that some brackets have begun to crack. The occurrence of cracks is not uniform on the same ribs on different aircraft, nor are they to the same extent on aircraft of the same age; the cracking is more random than that, suggesting it’s a result of problems in the assembly process, compounded by the selection of aluminum alloy used.

Each A380 wing has 2,000 such feet distributed over 62 ribs – 38 metallic and 24 carbon composite. Apparently the wing panels, some of the longest in use on any aircraft, are creep-formed to the desired contour of the wing surface at the location they will be fastened to. The rib feet at the top of the structure are designed knowing they will be in compression during actual service. The rib feet on the bottom of the structure are said to be designed to be in tension.

EADS who purchased the division from BAE Systems some time ago, make the wings in the UK as part of the Airbus consortium. The firm says the finishing of the holes, the application of the fasteners, and the less flexible nature of the 7449 T7651 alloy used, have all contributed to undue stresses in the area of the bond. The firm has a repair kit for planes in service and is working on a change in design and assembly to avoid the problem on new aircraft.

The wings, at 262-foot spans, are some of the largest of any commercial airliner, so maybe it was naïve to think that every conceivable issue was going to be computed in advance of service on such a pioneering design. But at 544 tons and capable of carrying up to 853 passengers in an all-economy configuration, airlines and their clients can be excused for demanding a comprehensive and lasting solution.