Pressure may be easing for steelmakers and with it the prospects, in some regions at least, of slightly improved margins. Coking coal, a key raw steelmaking ingredient and recently one of the commodity markets’ hot darlings, has been falling in price since the summer. As Australia’s spot price has fallen some 26 percent since the end of June last year, the contract price has, with a time lag, followed suit.

HSBC reports the Q1 contract price fell 18 percent quarter-on-quarter to US $235 per ton, compared to the spot price around US $225 per ton. 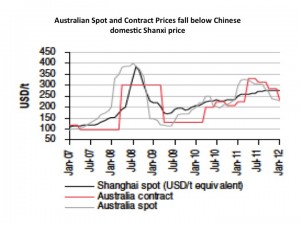 As China has stopped buying on the spot market, Australia’s coking coal exports fell 18 percent year-on-year to 120 million tons for the January-to-November period. The bank expects total 2011 exports to fall 16 percent to 134 million tons, partly reflecting the supply disruptions from the Queensland’s flooding in late 2010 and early 2011. Following extensive repairs and investments, production is climbing again fast and is likely to be back to 2010 levels in 2012, an increase of 19 percent to 160 million tons.

Meanwhile, back in the US, coking coal exports rose 25 percent year-on-year to 58 million tons in January to November 2011, benefiting from both a weak dollar and filling in the supply gap from Australia. US full-year exports are likely to hit 64 million tons, an increase of 25 percent, but will fall this coming year as the Australians are fully back on the scene with higher-grade product. 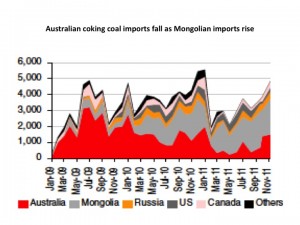 Japan, on the other hand, has lost ground following cutbacks in the aftermath of the 2011 earthquakes and tsunami. Reconstruction work is likely to be a major boost to steel production in spite of subdued export markets and a strong Japanese yen, making exports less competitive. Coking coal imports are expected to resume to 2010 levels of around 57-58 million tons in 2012, from a low of 51 million tons in 2011.

India will also increase imports. Lacking good-quality and readily accessible coking deposits, India’s growing steel sector will likely increase imports by some 19 percent in 2012 to 38 million tons. However, increases in Japanese and Indian demand will only partially offset falling Chinese demand which, when coupled with rising Australian demand, is going to see a market in much better balance in 2012.

Lower coking coal prices will benefit steel mills the world over, but particularly in China, which is facing cooling steel demand from a number of sectors and considerable over-capacity.