Alcoa (and the rest of the world) have been waiting for the Chinese to curtail aluminum smelter capacity in the face of weak prices and the high cost of power and raw materials, but the Chinese continue to confound expectations and, as a recent Reuters report underlines, continue to add new capacity.

“2012’s output (in China) would rise at least 10.5% from 2011,” Li Dongguang, president of the Chinalco trading unit of Aluminum Corp. of China, is reported as saying. Global output, including China’s, would rise 7 percent to 48.8 million tons in 2012 from 2011 as capacity in China, the Middle East and India rises — even if some plants that rely on expensive energy supply may cut production, should world aluminum prices fall.

Meanwhile, demand is expected to rise by only 6.6 percent in China, below the rate of GDP growth and below the rate at which new capacity is coming on stream. Western producers such as Alcoa, Norsk Hydro and BHP Billiton, all of whom have idled or permanently closed smelter capacity, have been joined, at least in spirit, by Rusal, that said this month that it expects to idle 6 percent of its capacity within 18 months.

To set such a long time frame to potential closures suggests the Russian aluminum producer is trying to create a sense of impending shortage rather than flag firm plans to close any capacity. Indeed, Rusal’s production increased marginally last year to 4.12 million tons, even as some sales were shunted in 2012 close to year’s end. 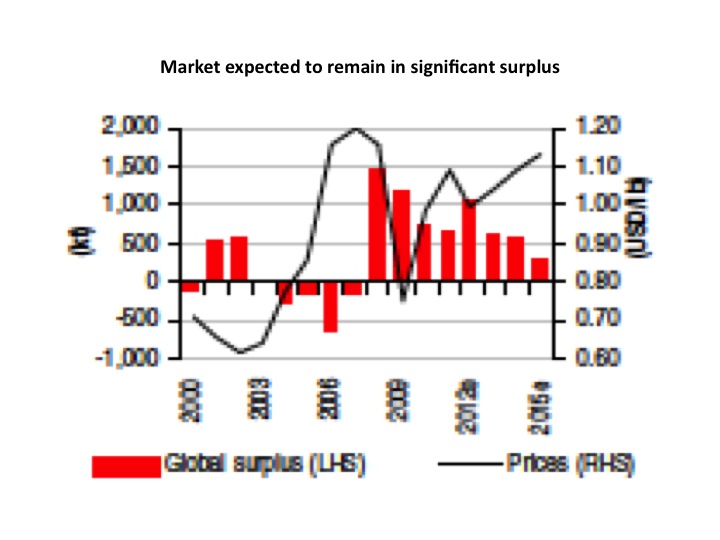 Everyone appears to be pointing at everyone else saying they are likely to cut production, with only those producers facing long-term cost pressures finally giving up the fight and closing capacity. Local or provincial governments keen maintain revenues and employment are no doubt supporting Chinese producers.

Although some capacity was said to have been idled temporarily in January due to cost pressures, as up to a third of producers are said to be losing money at current prices. They may be holding on for price increases expected by both Chinalco and Rusal in the second half, although both are predicated in part on the assumption that someone, somewhere will idle production.

Knowing the Chinese, though, any rise in price will be accompanied by the re-starting of idled capacity.