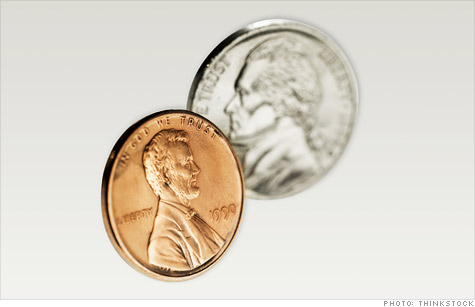 “As metal prices are extremely volatile, the delay incurred by proposing and passing legislation [to substitute nickel and copper in US coins] could result in the new compositions being outdated by the time of their enactment,” the U.S. Treasury said in its budget proposal. –Reuters

“Today in Science we read the book “The Very Best Place for a Penny” written by Dina Herman Rosenfeld.” -Email update from local after-school program

In a rare Arts & Culture segment, MetalMiner had the chance to sit down with author Dina Herman Rosenfeld, whose has just released a new book.

MetalMiner: Hi Dina, thanks for sitting down with us today.

Dina Herman Rosenfeld: Anytime, thank you for having me.

MM: Let’s talk about the meaning of the title of your new book; “The Very Best Place for a Penny is a Scrap Mill in China.”

DHR: Well, my last book, “The Very Best Place for a Penny,” was written back in the old days, in the times when people actually used pennies and nickels and dimes to purchase things. They would carry them in their pockets, take them out when they wanted to buy something, and put them together in different combinations to pay for their soda, say, or a ticket to a peep show. Now, those days are mostly over.

MM: Yeah, tell me about it — I just throw my pennies in the garbage. But back to the title; how is the very best place for a penny the scrap mill?

DHR: Have you seen the market prices for copper lately? [Dina’s emphasis]

MM: Why, yes we have actually.

DHR: Then you know that any copper out there is more useful in construction and transportation end-uses in emerging markets rather than rotting away on our coins. Or even as a store of value in physical metal ETFs, if that’s your bag. Copper smelters in China would kill for some copper scrap, I imagine. Now, granted, pennies haven’t been pure copper since 1837. But the US Mint still makes nickels with 75% copper/25% nickel, and the penny is about 2.5% copper — the rest of it is zinc. All three of those metals’ prices have risen drastically in the last 10 years.

MM: So basically what you’re saying is, commodity volatility has hit even the government’s spend pretty hard.

DHR: Indeed it has. Apparently no organization is safe from commodity volatility risk.

MM: Will you be able to make it to our conference in March? We’ll comp you.

This interview was fictionalized, condensed (poorly) and edited by Taras Berezowsky.