As far as the metals industry (and specifically the steel industry) are concerned, a lot of the numbers and reports we’ve been seeing point to an improved — although, some may argue, still not much-improved — 2012, economically speaking.

The Conference Board recently released the latest update of the Leading Economic Index (LEI) for the United States, showing a rise of 0.4 percent (it stands at 94.9). Being in the positive for the LEI is always a good sign, but even better is the fact that the latest increase is part of an upward trend since the middle of last year, as the graph below shows. 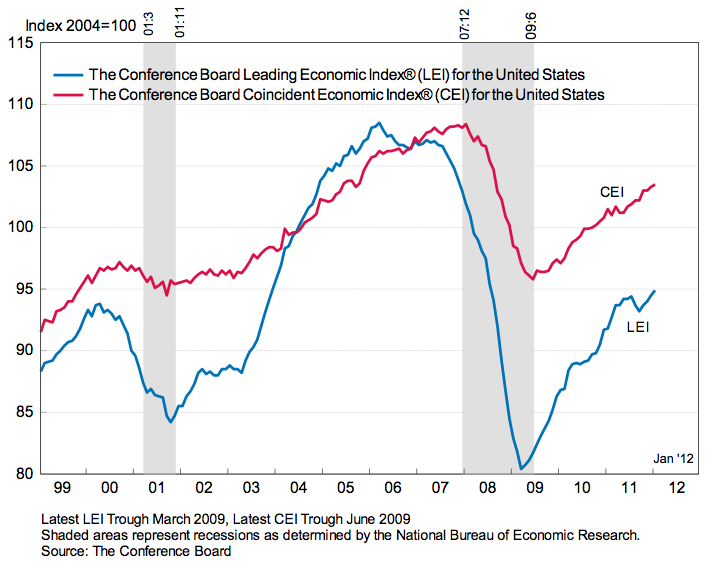 “The LEI’s increase in January was led not only by improving financial and credit indicators, but also rising average workweek in manufacturing,” said Ataman Ozyildirim, economist at The Conference Board, in a statement.

The LEI is considered a good overall indicator of where the economy is headed because of the 10 elements it takes into consideration, including average weekly hours in manufacturing; manufacturers’ new orders, consumer goods and materials; the ISM Index of new orders; 500 common stock prices; and building permits.

Currency markets are pointing to good news for steel producers, especially exporters. According to the most recent Steel Market Update from Gerdau, the Federal Reserve Broad Index of the value of the dollar has been declining since Dec. 14, 2011. 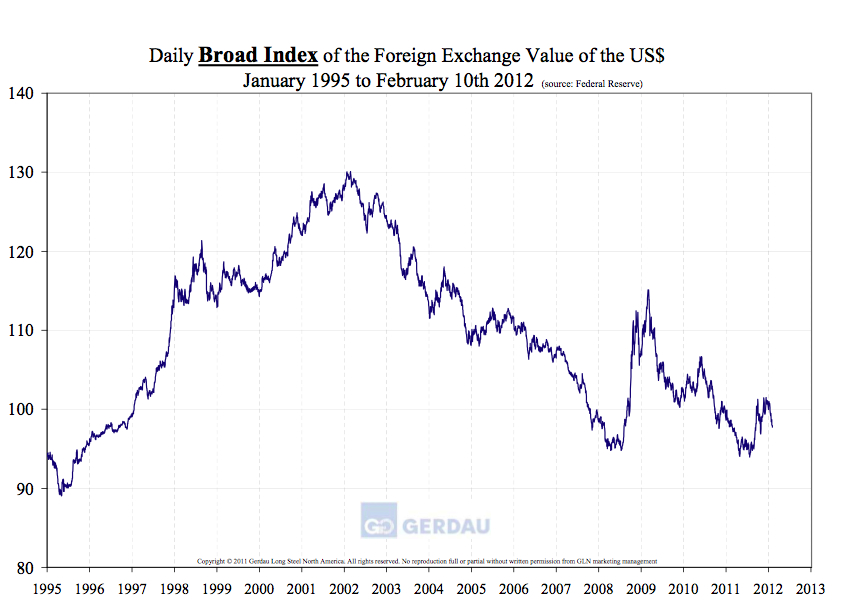 In the last month, currencies of other steel-making nations have been appreciating, particularly the Mexican peso (up 6.6 percent), the euro (up 3.7 percent), the Brazilian real (up 4.3 percent) and the Turkish lira (up 4.3 percent). The weakening of the dollar in the last 30 days should help promote steel exports and hinder imports, SMU notes.

But will these better economic trend indications last? Bart van Ark, chief economist for the Conference Board, expects GDP growth to hold at an average of about 2 percent in 2012, and sees the recent gains in employment set off by increases in employment costs and weaker productivity, hence cutting into corporate profit margins. However, this should keep US inflation costs down.

From what we’ve been hearing and seeing from manufacturers, rising raw material costs will also likely cut into margins this year, as commodity price curves haven’t shown any real, sustained slowdown, nor are they expected to drop considerably. However, we must consider what the EU crisis could mean for the US economy as well, since both are intertwined; and that is a soap opera that will continue to unfold in the coming months.