Silver Prices – Which Way Next?

Like gold, the silver price has risen since the start of this year after hitting a one-year trough in December, leading some to suggest that silver is set for a rebound on the coattails of gold.

But while there has always been a link between the two, silver’s more lackluster performance of late has been a reflection of the differences (rather than the similarities) between the two metals. Some 60 percent of silver is used in industrial applications and the largest price driver in recent years has been physical demand from China, which became a net importer from 2008. 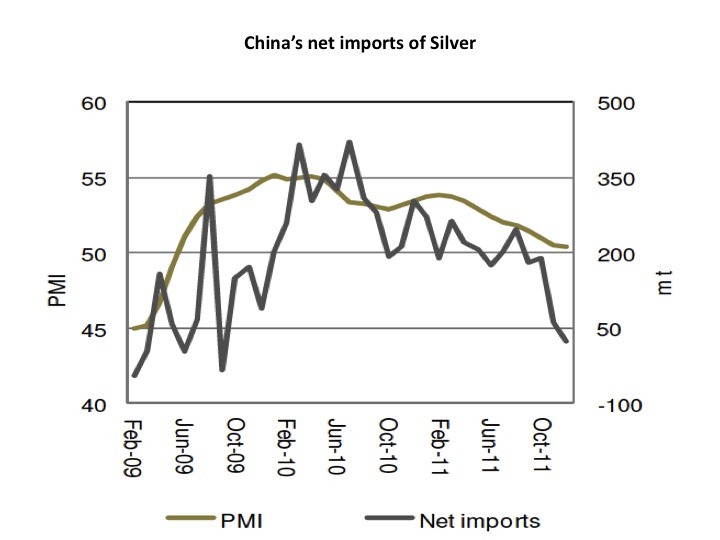 As this graph and accompanying analysis in a recent Standard Bank report to clients illustrates, silver imports into China have been falling as industrial demand has slackened; PMI taken here as an indication of demand direction.

At the same time, China mine supply may only grow by 7 percent, still leaving a supply gap of 1,443 tons in 2012, the bank says. As we mentioned above, China flipped from a silver exporter to importer in 2008 and since then has imported a total of 7,319 tons of silver, creating much of the market tightness. China can fill its fabrication demand gap by either importing metal once again or drawing down existing stockpiles, but as the chart below shows, inventory levels have been rising even as imports have been declining, suggesting underlying demand is weak. 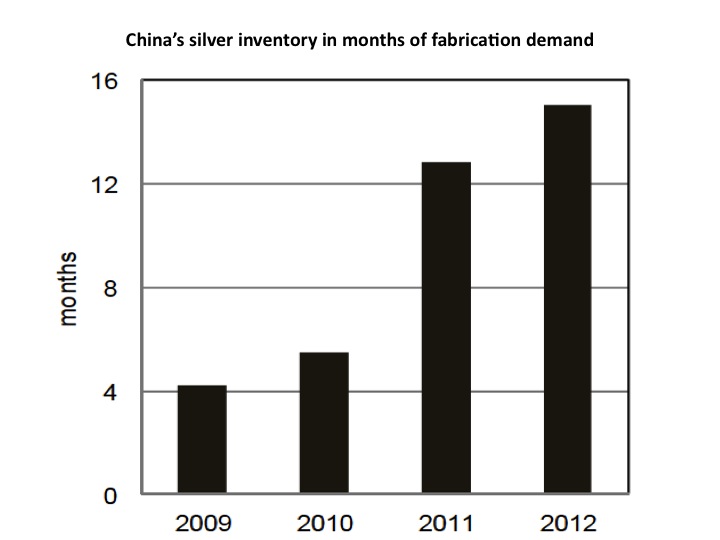 To underline the lack of consumer demand, premiums have declined on the Shanghai Gold Exchange (SGE) from around $4-$5 per ounce when silver was trading above $40, to less than $0.50 per ounce recently. Yet the bank and others suggest this is a temporary lull and rising demand is expected to put upward pressure on prices again from Q3 2012.

We are struggling with this position. If inventory has been rising while imports have been falling in an economy that, although cooling, is still growing at 8+ percent per year, why would imports start to rise later this year? Particularly if prices remain above their lows and further speculative stock building is not seen as advantageous.

Investors elsewhere are reacting with mixed signals. On COMEX, silver net speculative length continued to rise, marking a seventh week of successive gains, with a 262-ton increase. This brings the total net speculative length added this year to 2,773.3 tons, according to Standard Bank. Unlike in the previous week, this time the rise was largely a result of a marked decline in short positions — 206.2 tons, while 55.8 tons were added to longs. After two weeks of buying, however, ETFs turned net sellers, with 106.2 tons shed from holdings this past week, suggesting ETF investors see short-term weakness as the more likely position for now.

Whether silver has the legs to re-scale price levels of $40 per ounce or more will depend partly on gold and developments in Europe, but mostly to industrial demand and the needs of China’s electronics industry. For now, though, they appear well-stocked with metal.