As my colleague Lisa is fond of saying, “nothing kills high prices like high prices” — and nowhere could that be more true than in the market for rare earths, whether in the form of oxides or metals.

Prices soared in the first half of last year to a peak in the summer, following restrictions imposed by the Chinese on the export of rare earths, and a two-month moratorium on exports to Japan in retaliation for the Japanese arrest of a Chinese trawler in disputed territorial waters. The dispute was resolved and exports resumed, but the damage was done.

Everyone from speculators to processors to end-users piled into the market to secure supplies. Prices peaked in the summer, but simultaneously added impetus to a process that had been underway for the previous year or more to engineer down, if not out, the use of rare earths in a wide range of applications — for which rising output had been a driver in demand.

As recently as December, Rare Earth Investing News speculated that prices appeared to be stabilizing after sharp falls in the second half. Cerium, for example had dropped from $170 per kilogram in August to $45-60 per kilogram by November, according to the NY Times. But as we shall see, prices have continued to fall.

Part of the unfolding dynamic last year was developments in China. The original rise in prices was largely due to restrictions the Chinese Ministry of Commerce placed on exports drastically cutting quotas, applying export taxes and clamping down on illegal mines in an attempt to gain control of an industry that was causing widespread environmental damage.

MarketWatch reported that many firms migrated production of rare earth-intensive components to China to get around the export duties and quotas, a development that may well have been part of the Ministry’s rationale for limiting exports, but allowing unfettered domestic sale of material.

However, as the following graphs taken from the MetalMiner IndX℠ of domestic Chinese rare earth materials show, prices for select oxides and metal have continued to slide domestically as exports have slumped and China’s exports of finished goods have suffered in the face of weak global demand: 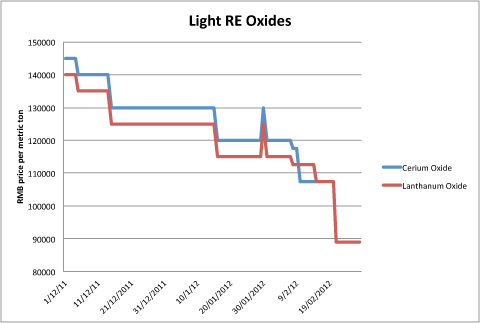 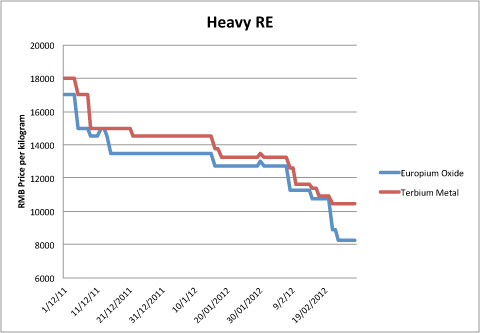 The global drop in prices is a combination of a number of factors, not least of which being a widespread drop in buying.

You’ll note we say buying and not demand. Certainly demand has suffered as the rapidly escalating prices spurred innovation in reducing the percentage of rare earth metals in specialist applications. With supply still constrained, this process is unlikely to be reversed; consumers are acutely aware that even with the ramp-up of Molycorp’s Mountain Pass facility adding supply of light rare earths, heavy rare earths may be reliant on the Chinese for many years to come.

But the fall-off in demand is not as marked as the drop in apparent demand suggests.

To be continued in Part Two tomorrow.