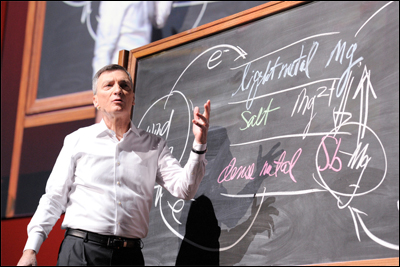 Donald Sadoway, materials chemistry professor at MIT, believes that “we need a better battery if we’re going to improve our ability to make use of electric power.” He explained his rationale, using a chalkboard, to an audience at the annual TED (Technology, Entertainment and Design) 2012 conference in Long Beach/Palm Springs, California: “The way things stand, electricity demand must be in constant balance with supply” (from “Liquid battery could charge green energy” by AFP for Dawn Media Group). Furthermore, Sadoway stressed “innovation” from the ground up. From the TED Blog:

The battery, as Sadoway sees it, is the key to addressing strained energy production and consumption. Aluminum smelters inspired his idea of a liquid metal battery. According to “We Need a Battery Miracle” by Bill Gates (an investor of Liquid Metals Battery Corporation –LMBC), the mission became clear: “To develop an inexpensive ‘liquid metal’ battery that will dramatically improve battery efficiency and provide large scale energy storage.” 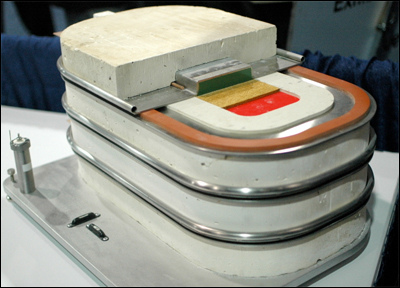 Vanadium and magnesium are the battery’s key metals. In tech-speak, Sadoway’s liquid battery “uses less costly liquids in the cathode, anode, and electrolyte of a battery as substitutes for traditional materials such as lead acid and lithium; molten salt rest between two layers of liquid metals,” according to “Liquid Metal Battery draws investors” by David Worthington for SmartPlanet. (You can read more about the liquid metal battery in the paper “Magnesium–Antimony Liquid Metal Battery for Stationary Energy Storage” published in the Journal of the American Chemical Society.)

*Don’t wait until Monday to register for our cutting-edge manufacturing conference, Commodity EDGE, coming up soon — March 19 and 20! See below: