Following the sudden exit of Rusal’s chairman, billionaire Viktor Vekselberg, happenings on the aluminum market front are grabbing our attention. Rusal is in “deep crisis caused by the actions of management” (in Veskelberg’s words quoted by Reuters) as far as the company’s debt level is concerned; its current stock price is now around 43 percent of its IPO price. The graph below shows Rusal’s stock price benchmarked against LME aluminum prices: 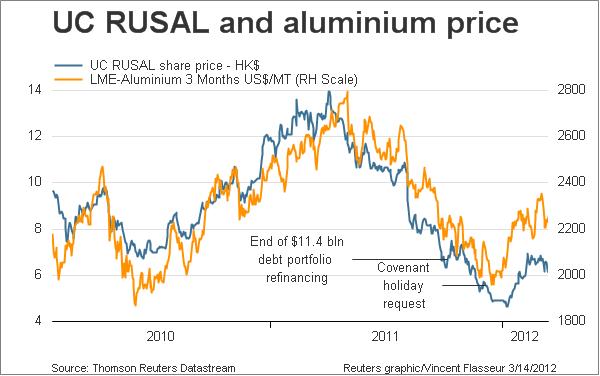 According to Bloomberg, exchange prices have not held high enough to exceed Nalco’s price of production, which currently stands at anything higher than $2,300 per ton, making aluminum production uneconomical — therefore forcing the company to keep 10 percent of its production capacity closed. (LME aluminum has dropped 19 percent since May, falling from a six-month high of $2,353 a ton on March 1 to around $2,260 per ton currently.)

Nalco closed capacity for two main reasons. First, China’s demand for key industrial metals has been lagging, as Beijing cut back GDP growth targets and focuses more on consumer spending rather than capital investment and construction. Second, Nalco doesn’t have its own secure coal supply — if it did, it may be able to keep producing aluminum profitably. The company would have to import its coal, and at current prices, many agree that’s just not feasible.

However, the pricing slump hitting aluminum may, in the short-term, be kept in check by another, familiar issue. Aluminum warehousing is again in the news — namely, fears that necessary metal inventory could be stuck for months in warehouses owned by the likes of Glencore and Goldman Sachs. This time, however, the Detroit warehouses are not the primary concern — that award goes to the Dutch port of Vlissingen and in the Malaysian port of Johor.

Even still, Reuters reports that “taking Vlissingen, Johor and Detroit out of the system, there’s almost no ‘free-float’ or available aluminum, because the rest of the 3.5-million tons is largely tied up in financing deals,” according to an analyst. Ultimately, the warehousing tie-ups are rendering inventory, as a guide to the fundamentals of demand/supply, rather useless as a way to gauge aluminum consumption.

Overall, China’s demand situation will still be the key driver for medium to long-term aluminum pricing. Prices now seem to be set for testing support around $2,200-2,150 per metric ton, but HARBOR Aluminum predicts prices will still inch up during Q2 and end up at $2,600 per ton by year-end.

Time is running out — only 4 days left to register for Commodity EDGE! Click below: