When we think of tin, we tend to think of tin cans — of course, comparatively only a tiny amount of tin goes into the packaging industry nowadays.

The cost alone has driven the use of cheaper alternatives, reducing the percentage used down to 16-17 percent of total tin consumption. Tin still remains an important alloying element. When combined with copper or aluminum, it has applications in bearings; and with titanium, it strengthens alloys by enhancing the crystal structure.

Tin alloys and salts have wide usage within the chemicals industry, often because of their reactivity as an intermediate material, but by far the largest application nowadays remains in lead-free solders where some 53 percent of all tin consumption occurs. One would expect that with China’s export manufacturers suffering and with China as the largest electronics assembler that tin consumption might suffer.

That’s not really the case at all.

Demand remains robust and, according to the World Bureau of Metal Statistics, the tin market ended up in deficit last year to the tune of 5,200 metric tons. The latest numbers for December show refined production trailing demand by 26,500 tons, to 30,000 for the month.

How will Chinese demand respond this year? Curious minds will want to know, after rising 18.6 percent last year, well above overall Chinese GDP and even above the rise in wider manufacturing indexes. 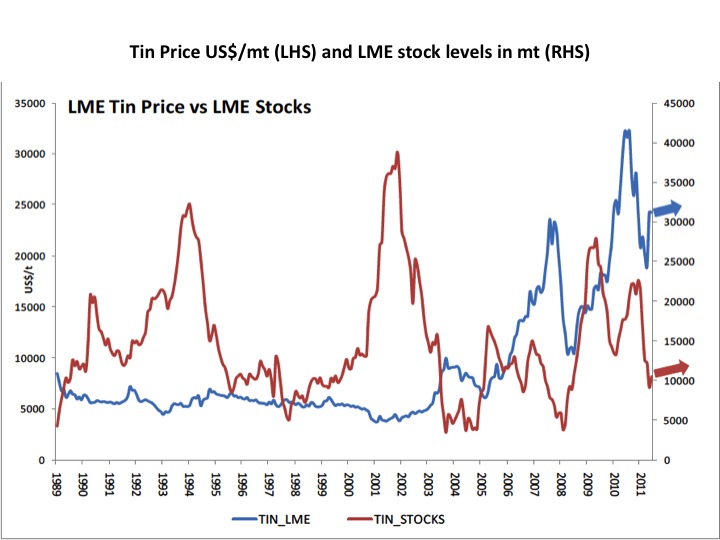 Global stocks have fallen with almost all recorded stocks now residing in Asia. The International Tin Research Institute forecasts demand will outstrip supply again in 2012 and prices may rise to $24,000-$26,000 per metric ton, as no new mines will come on stream in the short term.

Even further out, new sources remain limited, with only Kazbah’s Achmmach tin project as the most promising addition. Meanwhile, traditional sources such as Indonesia, impacted by monsoon rains, have caused exports to plummet. January hit a two-year low according to Bloomberg, but more recently, Reuters reported exports had picked up in February, underlining the volatile nature of Indonesian supplies.

Nevertheless, supply remains constrained and pressure will only increase as global (and particularly manufacturing) GDP rises this year. Certainly the price risk appears more on the upside than down.