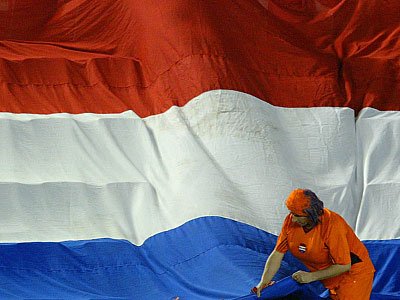 Outside of Europe, the Netherlands is often overlooked in the debt crisis debate and analysis, largely because it lacks the GDP of other core countries — $780 billion as compared to Germany’s $3.28 trillion and France’s $2.56 trillion. (Even Spain at $1.41 trillion and Italy at $2.01 trillion are considerably larger.) But the Netherlands is also overlooked because of its relatively small landmass and population.

It is a mistake to dismiss the Dutch as peripheral to the workings and future of the EU. The country punches well above its weight both economically and, more importantly, politically. In the halls of EU power brokers, the Netherlands has been a keen advocate of austerity, a natural extension of its Germanic approach to hard work and fiscal conservatism — a doctrine that has served it well over the years, achieving a high standard of living and a pivotal role as the entreport to the industrial heart of Europe.

So the recent political crisis faced by the Liberal-led coalition in the country is all the more intriguing for what it tells us about possible futures for the European Union.

Where the Netherlands Economy Stands

The Netherlands has slid into recession this year, resulting in a sharp rise in its projected 2013 deficit to 4.6 percent. At the same time, the spread between Dutch and German 10-year bonds has risen over 20 basis points as the markets have worried the country may lose its triple-A rating, a fear heightened by the political deadlock.

The crisis is about how to bring that down to the 3.0 percent target, which the country has been at the center of insisting other European states should aim for. Although the Netherlands has led by insisting Greece, Portugal, Ireland, Spain and Italy must adopt harsh austerity measures if they are to qualify for any support, nevermind bailouts, the government cannot now agree on how to bring its own house in order.

A row between the Liberals and the far-right Party for Freedom (PVV) means the government is short on votes needed to push reforms through, even after three weeks of secret talks. A report by the “Euro-sceptic” (as the FT put it) research group Lombard Street, a UK consultancy, is probably not helping things.

Will the Netherlands Leave the Euro?

The FT states the report was prepared for the PVV and is pessimistic about the euro-zone’s future. Under its worst-case scenario that Greece, Portugal, Italy and Spain all have to leave the euro-zone after failed bailout attempts, it concludes that the Netherlands would save €120 billion over three years if it left the single currency now bolstering the PVV’s antagonism toward cuts, which would not be necessary if the country was not part of the Euro.

The report painted a bleak future for European core countries Germany, the Netherlands, Finland and probably France, saying austerity programs and internal devaluation would be unable to restore peripheral European economies to competitiveness, meaning the euro-zone would become a transfer union.

Will the Netherlands drop out of the Euro and go it alone, as the report recommends? No, almost certainly not, but the very fact such hard-line positions are holding any credence in the Hague underlines how troubled the core states are at the almost inevitable prospect of them having to fund bailouts in southern states for years to come.