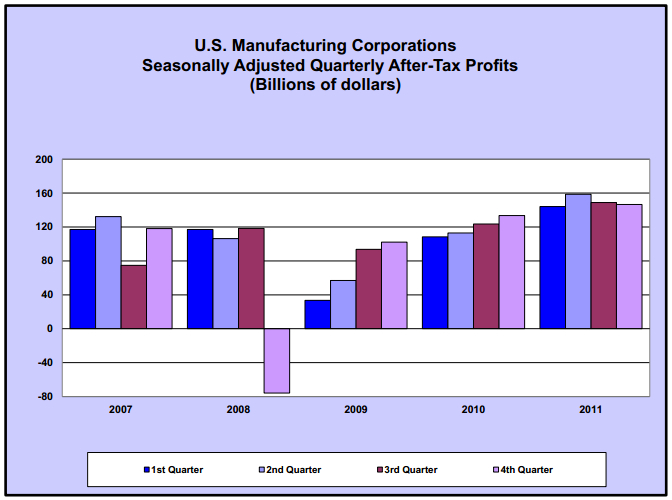 Although profit margins for US manufacturing corporations seem to have fallen off the past couple quarters after consistent rises since the aftermath of the Great Recession (seen above), the US manufacturing economy overall is still trucking.

Going by one of the most prominent indicators across industries — the Institute for Supply Management’s PMI figure — the ISM reported just this week to be “53.4 percent, an increase of 1 percentage point from February’s reading of 52.4 percent, indicating expansion in the manufacturing sector for the 32nd consecutive month.”

For both US manufacturing at large and the metals industry specifically, there are, of course, myriad indicators that could point to whether prices will rise or fall. One of these indicators is service center/distributor inventory.

In writing about the stainless steel market, for example, my colleague Lisa put it this way: “Inventory in general serves as a double-edged sword. If inventories remain lower than the historical average, one might assume the supply chain will need to re-stock, hence demand will rise. If inventory is higher than the historical average, then “burning it off” so to speak lowers demand and hence pricing.”

Which should illuminate the latest figures from the Metals Service Center Institute (MSCI). According to an MSCI press release, steel product inventories increased 1.8 percent from January to February 2012, and 12.5 percent over February a year ago, to 8,924,500 tons at the end of February 2012. This represents 2.4 months’ supply in inventory, down 1.6 percent from a year ago, MSCI said.

In terms of aluminum, inventories of aluminum products increased 4.6 percent over February a year ago to 374,700 tons at the end of February 2012, which represents 2.9 months’ inventory supply — an 8.8 percent drop from a year ago, according to MSCI’s release.

On the whole, total inventories of manufactured durable goods in February, up 26 consecutive months, increased $1.4 billion or 0.4 percent to $373.6 billion, unchanged from the previously published increase, according to the latest US Census data.

However, this number represents the highest level since the series was first published on a North American Industry Classification System (NAICS) basis and followed a 0.6 percent January increase, according to census analysis.