Last June, in an aluminum market analysis during HARBOR Aluminum Outlook conference in Chicago, Lloyd O’Carroll gave attendees an overview of the aluminum beer can market. He showed a slide containing a graph that depicted US beer consumption.

“I try to do my part in this, and I’m going to keep trying,” said O’Carroll, who is senior vice president and metals equity analyst for Richmond, Va.-based Davenport & Company. “The rest of you — do your part.”

What O’Carroll was promoting, of course, was not indiscriminate alcoholic consumption (necessarily), but increased domestic aluminum sheet usage in the beverage industry. The 2008 recession took its toll on beer consumption, which showed a 2 percent decrease in total domestic consumption from 2008 to 2009, the biggest drop in over a decade.

Fortunately, O’Carroll was happy to report, more beer is going into cans than into any other containers.

And, according to a recent Bloomberg article, a bit more of that beer will soon be under the Molson Coors name.

It just won’t be sold in the US market.

The purchase will not really help domestic beer consumption, as the move will push Molson Coors’ business into Central/Eastern European markets — namely, the Czech Republic, Hungary, Romania and Bulgaria — which are dominated by Carlsberg, Heineken and SABMiller. (See graph below). 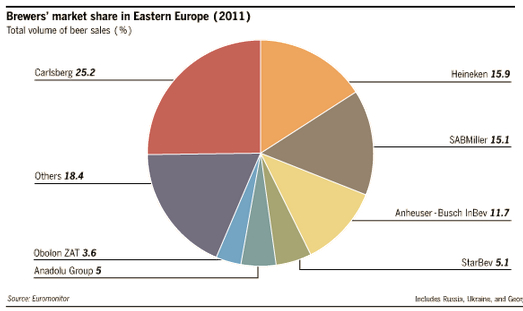 The move shows that the US beer market is still rather anemic.

Bloomberg cites Beverage Information Group’s findings that “U.S. beer volumes have fallen for three straight years, including a 1.5 percent decline in 2011.” The big brewers’ pesky counterpart, the craft brewing industry, is growing fast, but their sales share still only represents 5.7 percent by volume and 9.1 percent by dollars in 2011, according to the Brewers Association.

However, Trevor Stirling, an analyst at another sell-side research firm, Sanford C. Bernstein, was quoted as saying that the craft and import sectors account for 18 percent of US market share and “are growing fast.”

Nonetheless, more than 30 percent of the world’s beer ends up in cans, according to the Can Manufacturers Association, and as the No. 2 brewer in the US (with their US arm, MillerCoors, holding nearly a 30 percent market share, according to Beer Marketers Insights), Molson Coors is responsible for a sizable share of aluminum recycling and can shipments — heck, Coors is even responsible for the first-ever aluminum can.

As long as emerging beer markets continue to grow, and the North American beer markets don’t completely tank, global demand for aluminum sheet and recycled scrap should remain steady to rising in the years to come.

Molson Coors had better take steps to up their market share now, though — analysts at Societe Generale speculate that the beer industry’s 800-pound gorilla, AB InBev, may bid for closest competitor SABMiller before too long…