Home | Ferrous Metals | Poetic and Practical: The Gateway Arch in the Gateway to the West
Metal Appreciation

Poetic and Practical: The Gateway Arch in the Gateway to the West 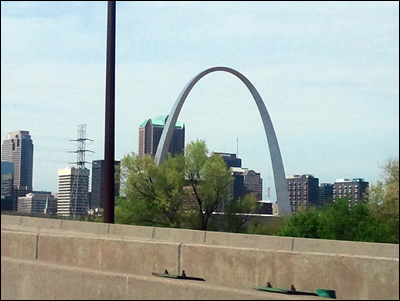 While driving on Interstate 64 toward St. Louis, Missouri (aka “Gateway to the West”), I enjoyed a glimpse of one of its most cherished sights: the Gateway Arch. I’d seen pictures and knew a tiny bit of its history. But this was my first time seeing it in person, though from a distance. 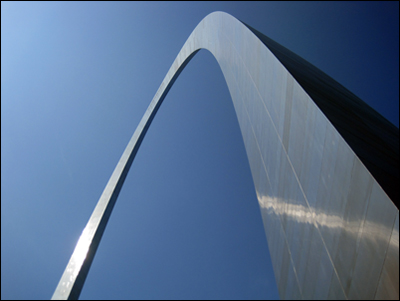 Although I took it in while driving, the structure’s expression demanded a closer look. Luther Ely Smith, a St. Louis lawyer, envisioned the then-nonexistent memorial in the early 1930s. He desired a memorial that expressed the “pioneering spirit.” By holding a design competition in 1948, Smith paved the way for the arch’s eventual birth. In 1948, Smith congratulated the contest’s winner, architect Eero Saarinen:

“It was your design, your marvelous conception, your brilliant forecast into the future, that has made the realization of the dream possible—a dream that you and the wonderful genius at your command and the able assistance of your associates are going to achieve far beyond the remotest possibility that we had dared visualize in the beginning.”

The “associates” that Smith referred to were: Associate Designer J. Henderson Barr, Landscape Architect Dan Kiley, the sculptor Lily Swann Saarinen and the painter Alexander Girard. (Delighted to know that Girard was a member of Eero Saarinen’s design-contest team. He is known for his playful textile designs and more.) Engineer Hannskarl Bandel enhanced the construction, durability and environmental tolerance of Saarinen’s curve.

Construction began in 1963 and was completed in 1965. (Before the Gateway Arch, Eero Saarinen’s first major building, in collaboration with his father, was the steel-and-glass General Motors Technical Center, 1956, in Warren, Michigan.) The effort to make a mathematically sensitive monument, spanning a width and height of 630 feet (192 meters), amounts to raw poetry—requiring human energy and teamwork to achieve a poetically seamless result. From the archives of The State Historical Society of Missouri-Research Center, this picture speaks to the memorial’s many moving hands and parts in getting it real: 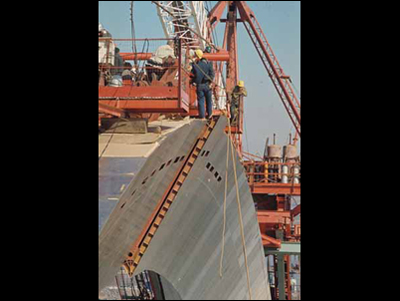 The Gateway Arch’s interior uses steel (2,157 short tons) and the exterior is covered in stainless steel panels (886 short tons)— the most used in any one project in history. 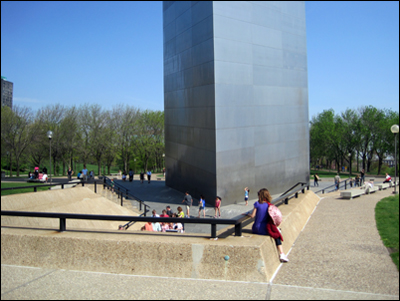 When the memorial’s idea was announced in the early 1930s, the public judged it impractical. Smith’s retort was that the emphasis be placed on the spiritual. Happily, the monument and its location, including its grounds and surroundings, satisfy both the practical and spiritual. Being near the Mississippi River adds to the Arch’s sense of place.

When I went to encounter the Gateway Arch, the weather was perfect—breezy and filled with sunlight. The memorial’s simplicity beamed. This was matched by the presence of families, kids, individuals being active, and playing a part in a city’s centerpiece that compels you to look up.