The environment for the offshore oil industry is clearly a challenging one in the wake of BP’s Macondo spill in April 2010. Regulators are understandably sensitive and watchful; one wouldn’t have it otherwise if anything is to be salvaged from the loss of life and environmental damage that resulted from Deepwater Horizon. 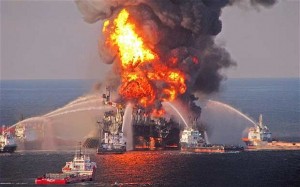 But $21.8 billion of lawsuits and criminal charges against company employees for a minor leak — the like of which has been happening in the region for millennia — suggests an official who may be looking to make a name for himself rather than open a debate into wider operational safety procedures for the industry as a whole.

Offshore rig problems are probably no more common now than pre-2010 yet they are getting more coverage. Witness Total’s gas condensate leak from the Elgin platform in the North Sea last month.

The gas leak was reported on March 25 and is spewing an estimated 200,000 cubic meters of natural gas from the evacuated platform into the air per day, forming a highly explosive gas cloud around the platform and a growing sheen of condensate on the sea surface. Coverage was immediately linked to the BP spill even though it was gas being extracted from a field at the end of its life, rather than Macondo, which was a development oil well.

Further day-to-day coverage has been following even the smallest of leaks from the Campos basin since Mr. Santos’ actions. Last week, an estimated 14-barrel leak was raised in the same paragraph as the action against Chevron, even though the spill was thought likely to be from a ship.

PREVIOUS POST:
With Offshore Oil, Technology Is the Easy Bit – Part One
NEXT POST:
The Consequences of Mining Rare Earths and Trading Gold Futures In China – Part One