Time to check in on our performance regarding steel price forecasts and prognostications, which we tend to do in January of each year. Ever since I heard Jorge Vazquez of Harbor Aluminum suggest the notion of a “good month to buy aluminum” (which I found so peculiar, if not downright intriguing – you’ll have to drop me a line if you want to know what month he suggested), I have often wondered if steel followed any similar pattern.

Back in September, I suggested steel prices trough in the summer months (July/August) as well as in the month of December (or November). 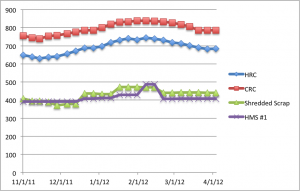 So it appears as though a slight trough did occur at that time. I also suggested back on Dec. 20, 2011, that prices “slowly increase throughout Q4 and into Q1” (which they did). Furthermore, I suggested prices will rise, but “we remain a little less than enthused about a big price run-up throughout Q1 and into Q2.” Prices for hot rolled coil and cold rolled coil increased by about 11-12 percent, hitting their peak during the week of Feb. 7, 2012. 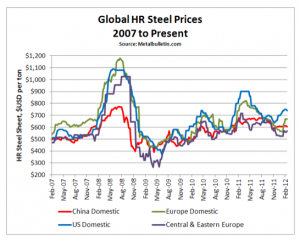 None of this suggests we ought to win any award for predicting prices; rather, we do have the makings of a trend (for years 2010 and 2011, we see some patterns). The above-referenced chart shows a run-up in prices post-February through May, followed by another August trough. (2008 and 2009 represent exceptions.)

As Mike Petro, lead category manager from Accenture, noted in his latest SupplyWatch report: “…current prices remain near the levels from the last stable pricing period in 2010. The current comparatively calm period of steel pricing is a welcome relief from modest volatility in early 2011 and violent volatility during 2008 through mid-2009.”

By no means, though, do we suggest to “sell in May and go away.” Market watchers will want to pay close attention to the patterns — steel prices have begun their summer ascent.