Perversely, as base metal prices slide, largely on concerns that China is cooling too much and the country’s consumption of commodities could be depressed for much of this year, iron ore prices have quietly been heading in the opposite direction.

A recent article in the FT states iron ore has risen 8.8 percent since the start of the year to above $150 per metric ton this week – even as other industrial metals such as copper and aluminum have been sold off. Colin Hamilton, senior commodities analyst at Macquarie in London, is quoted as saying he expected Chinese steel production to have risen to an annualized rate of 715 million tons in March – the highest since last summer.

Moreover, inventories of the ore at small Chinese steel mills have fallen to 31 days of consumption from 35 days at the start of the year, predicting that prices would rise to $160 in the next four to six weeks.

While the Western press pontificates about what is or is not happening in China, the Chinese just get on with it, motivated by their own (sometimes polar opposite) view of the state of their own economy. Iron ore prices are largely driven by the supply/demand balance, but with India being a bit player nowadays, the Australian miners along with Vale have the supply game pretty much to themselves.

As José Carlos Martins, Vale’s head of ore and strategy said in a separate FT article, “Many Chinese miners will stop producing if (the price) falls below $120,” adding that there are not enough new supplies globally to push the price lower.

So taking the low stock levels and rising price, we can reasonably assume steel production is rising again in China, and at least among the Chinese, fears of excessive cooling are overdone. Interestingly, prices for semi-finished steel products in China have been rising too, suggesting mills have been able to pass on rising raw material costs in a still-robust local market.

However, as this graph using data taken from the MetalMiner IndX℠ shows, not all metals have risen equally. 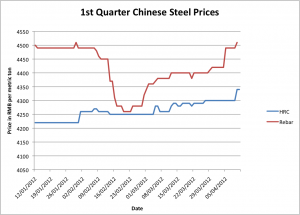 Hot-rolled coil has been rising steadily since the start of the year, while rebar used in construction fell up to the Chinese New Year, a time when fears of a China hard landing were at their height, but has since rallied strongly as local confidence and consumption has recovered.