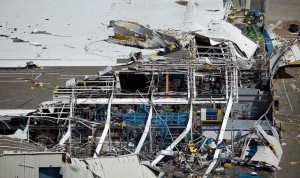 Source: The Wichita Eagle via the Seattle Times

Having come across the news that a tornado ripped through Spirit AeroSystems’ production facility in Wichita, Kansas, last Saturday — the facility that manufactures fuselages for Boeing’s 737 — I asked MetalMiner’s managing editor, Lisa Reisman, a few supply chain-specific questions about the situation.

Based on the photos in the Seattle Times story, it appears as though the facility may have sustained heavy damage. Will this result in major part shortages? What effect do you think this’ll have on production?

Lisa Reisman: It’s certainly difficult to assess damage based on one photo. But as any company knows, one needs only the smallest of part shortages to take a line down (recall the Boeing fastener issue of a few years ago?) Whenever I see a shed inside a manufacturing facility, I tend to wonder what it contains; if that shed serves as the tool shed, any damage, externally or otherwise, can cripple a production facility. We can joke and say a roof or the infrastructure had the most damage and that the production equipment remains okay, but if the items in a tool shed went out with a tornado, arguably that infrastructure damage can still wreak havoc on a supply chain. I would say, however, based on SpiritAeroSystems’ announcement that they believe some production could potentially commence as early as Wednesday leads me to believe that they company has a disaster plan in effect.

If you’re Boeing or Spirit AeroSystems, are there really any effective ways to prevent these types of risks (e.g. natural disasters) to your supply chain if you’re a buyer or supplier?

LR: Though one can never stop Mother Nature, I’m of the mindset that enough “unknowns” exist such that companies can certainly put in place disaster recovery plans that factor in precisely this type of supply chain risk. For example, in addition to the obvious “dual and tri-sourcing strategies” that companies deploy for precisely this type of situation, understanding where one can source certain functions/processes could allow for a rapid response if necessary. For example, if Spirit AeroSystems typically fabricates or welds sections of a fuselage together, having qualified outside suppliers to perform some of these critical functions could help mitigate risk.

How big an issue is considering geographic locations in context of potential supply disruption due to acts of God before building manufacturing facilities?

LR: What a great question. I think that’s like asking, “Why do people choose to live in California or in Chicago?” Inherent risk exists no matter where one decides to locate any kind of facility. The difference between successful outcomes and less successful outcomes likely has more to do with preparation than anything else. Most companies can’t afford to try and predict the next Black Swan event. Instead, they look at the odds of different types of disasters and likely put into place extensive scenario plans based on the impact of the disruption. When disaster strikes, they pull out the plan that most closely matches the outcome they previously predicted.

What does this say about diversifying your supply base if you’re a major OEM, such as Boeing?

LR: It reinforces the Honda Way of Sourcing (or Toyota — take your pick): have three suppliers in place for any key category and alter the percentages you buy from each depending on performance. In cases where production facilities go down, having two or three alternative sources for key processes can also help. In the case of Boeing, identifying alternative fuselage suppliers may not appear feasible (nor would we recommend it), but having alternative qualified suppliers for key assemblies/parts/processes ought to help.