The Euro is 13 years old this year, and any parent of a teenager will recognize the telltale signs — won’t do what you say, won’t save any money, spends every penny it can get its hands on, never says thank you and makes promises so vague you can’t hold them to account.

Well, Europe’s bureaucrats could be forgiven for thinking an adolescent Euro is exactly what they have on their hands. Just when peace seems to have been achieved, all hell breaks loose again. Last quarter it was the Greek debt crisis; this quarter it is set to be Spain. As we pointedly made clear at the recent Commodity EDGE conference in Chicago, the Euro crisis was far from solved with the Greek bailout and volatility is going to return time and again this year to upset metals prices.

Nobody Expects the Spanish Inquisition!

Base metal prices have come off, as the fear of a deepening European debt crisis has resurfaced this month. 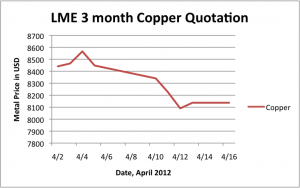 According to the Telegraph, the Bank of Spain disclosed the country’s biggest institutions borrowed €316.3 billion ($415 billion) from the European Central Bank in March, almost twice the €169.8 billion in February. Traders promptly dumped Spanish stocks and bought insurance against Madrid defaulting, convinced the data showed that the banks are now almost shut out of international credit markets.

Meanwhile, the cost of credit default swaps hit a record high of 500 basis points, meaning it costs $500,000 a year to insure $10 million of Spanish debt over five years. This compares with around $70,000 for the equivalent level of German debt.

Even Spain’s prime minister Mariano Roy went public late last week saying “it was not possible to rescue Spain,” but tried to reassure markets it would not be necessary. Spain is the fourth-largest eurozone economy and the 12th biggest in the world. Spanish GDP last year was almost five times that of Greece. On the surface, Spain’s government finances don’t look bad, with national debt at 68 percent of annual GDP – around half that of Italy.