Glencore Has Copper in a Squeeze

It would seem the world’s largest copper trader Glencore is in a tussle with the Chinese over position trades on the LME, a situation that in itself is little more than amusing — until you begin to look at the implications for copper consumers.

Glencore, by their own admission when they floated last year, controls some 50 percent of the available global traded copper market and 30 percent of the copper concentrate market – a dominant position, which begs transparent and careful handling if the firm is not to be accused of market manipulation.

With the global price of copper being set on the LME, trades and positions on that market should be watched closely to ensure the activities of any party do not have an undue influence on material availability, which in turn, impacts the price. Yet according to a Reuters article, Glencore is in a position where it holds between 50 and 80 percent of combined cash contracts and metal inventories – the exact figures are unclear because the LME does not require holders to identify themselves. 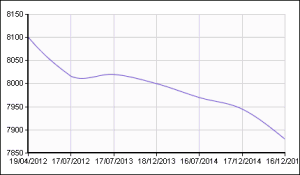 Trade sources, however, are clear that Glencore is the spider in the center of the web pulling the threads. By holding such a dominant inventory position and restricting supply, the firm is, if not single handedly driving the market into backwardation, at least adding to the distortion.

Backwardation means the cash price is higher than forward prices (above); in fact, the spot to three-month spread is the highest premium for three and a half years. The firm has been aided in achieving this position by a six-month rundown in inventory, as the graph below of LME inventory shows, making physical metal that much less available. 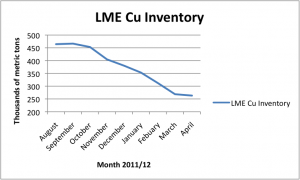 Not only are stocks 45 percent lower than they were just last October, but the stocks that are in LME warehouses are mostly in New Orleans and St. Louis, far from the main consumers in Asia.

On the other side of the equation, the Chinese are said to be long on physical metal, mostly in Shanghai warehouses, but short on the LME. Glencore’s squeeze is therefore hurting short sellers when their contracts fall due; in itself that is not the industrial market’s problem, but the situation unfortunately impacts metal consumers looking for prompt metal, and having to pay a premium because prices are directly linked to the LME settlement price.

The situation doesn’t look like it is likely to turn around soon. With a relatively tight supply market, there is no ready source of physical metal to relieve the squeeze and it is hardly in Glencore’s interest to unwind what must be proving a lucrative play.