You would have thought after the Sumitomo Copper Scandal in the 1990s the LME and the UK supervisory authorities would have clamped down on market manipulation, but it would seem on the face of it to be as serious as ever.

Over the last few weeks we have written about aluminum and copper, and now a Reuters article throws light on the state of the lead market. Spot prices on the LME are at a premium to forward prices, a position known as backwardation, for a metal said by the World Bureau of Metal Statistics to be in surplus in 2011 to the tune of 35,500 tons.

Demand from the main driver of lead consumption — automotive and e-bike batteries — has been lackluster, if steady, with Europe benefiting from a mild winter and weak new vehicle sales. In the US, auto sales have been steadily recovering, but the lead market there appears in comfortable balance, if the movement of LME stocks is any indication of activity; just 75 tons of canceled warrants suggests activity, at least as far as the LME’s role as a market of last resort, is not significantly active.

As the article explains, we would normally look to China to be the cause of sudden tightness in the market, but the Chinese market is said to be currently self-sufficient with net imports of refined metal just 670 tons in the first quarter and just 500 tons over the whole of last year.

Intriguingly, a review of inventory changes in European LME warehouses seems to hold the answer. 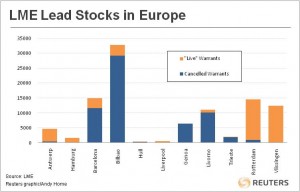 A huge swath of the LME’s lead stocks have been posted for withdrawal in the form of canceled warrants. According to Reuters, 12,050 tons of lead warrants, split between Genoa and Livorno in Italy, were canceled in recent days, bringing the April total to 94,350 tons and the ratio of canceled to total LME-registered stocks to 24 percent.