The nickel market, as Reuters points out in a recent article, has been characterized by two supply-side factors, even as demand has risen.

On the one hand, Chinese nickel pig iron (NPI) production has kept the country well supplied in refined nickel, in spite of a falling nickel price supposedly putting cost pressures on the NPI producers. And on the other hand, the contribution of new High Pressure Acid Leach (HPAL) projects has been repeatedly delayed to the point of a few analysts suggesting the technology will never be economically viable.

HSBC, in their recent quarterly commodities report, adds a third dynamic, that of Indonesian moves to limit, even ban, the export of nickel-bearing ore — which has been the main feedstock of the Chinese NPI industry. The bank is predicting a drop in Chinese NPI production later this year as a combination of restricted Indonesian exports, increased Indonesian export taxes and falling refined nickel prices putting cost pressure on NPI producers takes its toll on domestic Chinese nickel supply.

The bank believes this will force China to import some 74,000 tons of nickel in 2012. The bank also suggests with LME nickel prices currently around $17,500 per metric ton, most nickel production is below its marginal cost and much is into its 90th percentile of the cost curve, a situation that will support prices as the supply side responds with reduced production. 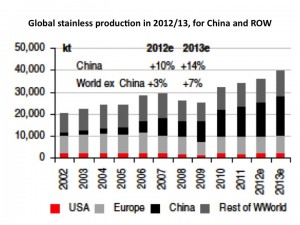 On the demand side, HSBC is seeing a much more positive picture for the stainless market, the largest single source of refined nickel demand. As the graph from the bank shows, stainless production is expected to grow this year and next, while the depressed nickel price will encourage a greater uptake of nickel-bearing austenitic grades further boosting demand.

Reuters is less certain that logical fundamentals will apply themselves. Chinese NPI has proved both stubborn in maintaining output in the face of falling sales prices and creative in developing new technologies to reduce the cost of production. Macquarie Bank is quoted as predicting another 100,000 tons of NPI production is likely to come on-stream this year, and Reuters suggests this will be new electric arc technology consuming significantly less power (and hence operating at much lower cost) than the traditional blast furnace NPI production technology. So in Reuters’ view, the Chinese NPI market may prove much more robust than HSBC has estimated and as a result, China may need little of the refined metal imports the bank had been predicting.

Both the reports expect supply from the four new major HPAL projects to increase this year as some have actually started deliveries and others are (finally) close. Collectively, Reuters expects these four projects to contribute some 200,000 tons of refined nickel over the next year or so, in addition to new traditional technology mines such as Anglo’s Barro Alto and Xstrata’s Koniambo. Alternatively, HSBC expects ramp-up to be slower and holds that the higher costs of these new mines will anyway support the price going forward.

As a result and in spite of rising stainless demand, both reports are predicting prices will remain weak; but whereas HSBC is suggesting an average LME price of $20,000 per metric ton ($9.07/lb) for 2012, Reuters is suggesting the risk is very much to the downside.

With prices already down to $17,500 per ton and physical premiums for top rated 4×4 cathode down 27 percent to just $200 per ton, supply is clearly well in excess of demand, suggesting Reuters’ more negative view on prices is likely to prevail this year, if not next.

PREVIOUS POST:
JSW Steel Weighs In On India's 2012 Demand for the Metal
NEXT POST:
Daily Copper and Aluminum Price Roundup: May 8, 2012