From electrical wires and plumbing pipes to roofing sheets and machinery, copper is a familiar metal to the construction and manufacturing industries. The copper business, in general, has had its ups and downs in recent years — and prices of copper have followed. After copper imports into the United States plummeted 46 percent in 2009 from the previous year, recent figures show the copper trade is crawling back to pre-recession levels. Are there any implications for copper prices?

Starting in September 2011, U.S. vessel imports of copper decreased for four straight months, despite positive economic news. February of this year started a change of pace and posted a 20 percent increase in imports from January. Refined copper cathodes and copper wire are the most common forms imported to the U.S., and both types exhibited significant increases in February.

The graph below illustrates copper import trends, showing February’s imports up from January, but slightly down from the previous year:

If you ask anyone where copper imports originate, the majority of people immediately think of Chile.

Rightfully so, as about one-fourth of total U.S. copper imports come from Chile. What may come as a surprise, however, is that Canada boasts an average import market share of 28 percent and Mexico trails with 14 percent. Even more surprising, Chile topped the list as the top exporter to the U.S. in 2011, but 2012 so far shows Chile as the second largest exporter, behind Canada.

Recent factors such as energy concerns, weather disruptions, and labor conflicts have influenced Chile’s decreased market share of copper in the past few months. If these concerns continue, the U.S. could see Chile’s market share drop even further. The graph below illustrates the top countries of origin for U.S. copper imports: 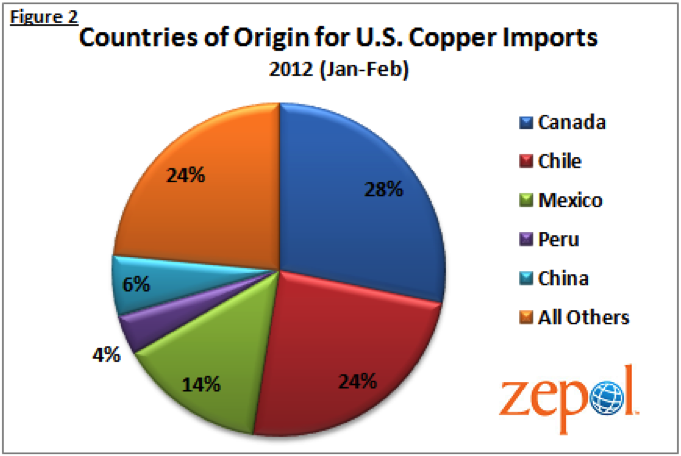 While copper imports have shown a significant turnaround since the gloomy days of 2009, the recent dip in imports has some worried. On the positive side for copper buyers, the latest trend has brought lower prices. The average price per kilogram of imported copper in 2011 was $9.24, while the first two months of 2012 have averaged $8.49 per kilogram.

One month doesn’t make a trend, but will February’s increase be the start of an upward trend for the copper industry? If the U.S. construction and manufacturing industries see increased production, it is very likely copper imports will see an increase as well — the flipside question would be, ‘which countries would see the increase in exports?’ Additionally, if this year is anything like past years, copper imports typically rise in the summer and fall months.