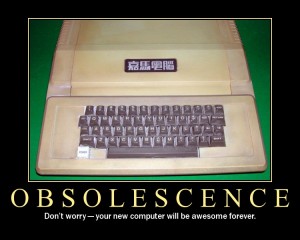 A really intriguing article in the Financial Times this week explores the problem of obsolescence and how it is becoming more acute as the pace of change increases. Quoting a source, the article illustrates the point by saying in 1903, the Wright brothers flew the first plane, and the flight lasted for something like 12 seconds. Sixty-six years later – which is not that long in the scheme of things – we got to the moon.

Since then, the rate of technological change has only gotten faster, and nowhere is the trend more acute than in semiconductors. The rise of consumer goods as the main outlet for research and development of semiconductors has shortened life cycles and accelerated the trend of phasing out yesterday’s chip in favor of tomorrow’s.

Many consumer goods have a life cycle of less than two years, driving a trend that estimates 3 percent of the world’s electronic components become obsolete each month. Pity the team maintaining systems like the B-52 bomber, which will have been flying for 86 years by the time it is phased out in the 2040s. Or nuclear-powered submarines or warships containing critical, technology-dependent systems expected to perform over decades of platform life.

After pointing out many more examples of how obsolescence is costing organizations billions to keep their systems running (the most heavily impacted often being military systems, where the development period is so extended many systems come to delivery already containing components that are becoming obsolete), the article suggests two solutions depending on the components and system involved.

The first is to design systems in a modular fashion so that parts can be swapped out for a newer component without having to redesign the whole system. The second is to design systems using standardized parts that are less likely to be phased out, where performance can be marginally undermined, but life cycle costs and longevity can be dramatically improved.

We had a client once who unwittingly found this to be true. A sophisticated engineering firm, they designed what were termed the ‘Rolls Royce’ of tube-bending machines, lasted for decades in grueling conditions and performed to industry-leading standards of accuracy. But there was one problem.