Embraer and Bombardier were probably not overly worried by the competition posed by the Sukhoi SuperJet 100 short-haul jet  prior to last week’s crash near Jakarta, Indonesia — but the tragedy will certainly hinder competition in the short to medium term from the jet that Russia had hoped would mark their return to civilian aviation.

While the cause of the crash is still unknown, it will do nothing to help orders, which currently stand at around 170 for the $31 million aircraft — mostly to former Soviet states, but recently with more firm interest from airlines further afield. According to the FT, the aircraft, a 100-seat, short-range regional jet is the first in a planned launch of civilian aircraft eventually hoped to reach 1,000 planes, but after safety scares, sales- and production delays, sales have been modest so far.

While Russia’s military jets compete well internationally, its civilian aircraft have traditionally only been sold in the former Soviet Union, Iran and parts of Africa — and anyone who has travelled in a Tupolev Tu-134 or Yakovlev Yak-42 aircraft will understand why. Ninety percent of Russia’s aerospace industry is geared towards military aircraft, and only 10 percent civilian, yet 75 percent of the world aviation market is for civilian aircraft. 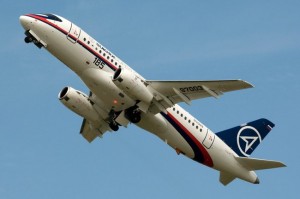 Reports vary, but either 44 or 45 crew and passengers, mostly Indonesian airline officials, were killed in last week’s disaster in what was intended as part of a sales tour of Southeast Asia that had already taken in Kazakhstan, Myanmar and Pakistan. Wednesday’s flight in Indonesia was to have been followed by visits to Laos and Vietnam.

The cause of this crash is unknown, although last year the first test flight was grounded because of a safety flaw. Soon after takeoff from a Jakarta airport last week, the pilot was granted permission to drop from 3,000 meters to 1,800 meters (10,000 feet to 6,000 feet), according to an AP article.  The plane was 11 kilometers (7 miles) north of Mount Salak at the time, an area considered outside the danger zone around the volcano, but the flight dropped off the radar immediately after the transmission and wreckage was subsequently found on the mountainside at 5,800 feet.

Aware of the poor image of Russian civilian aircraft, Sukhoi has made much play of its foreign partnerships during the development of the SuperJet — Boeing is a lead consultant and the engines are a JV with Snecma of France. Thales in France is said to be involved in the avionics and Finmeccanica of Italy has a 25% shareholding and shared marketing rights.

What has caused this current accident may become clearer once the black box, which has now been found, is analyzed. It will not just be Sukhoi and its Russian parent, United Aircraft Corporation, that keenly await the findings.