Most operations folks throughout the world have studied up on the famous teachings of Edward Deming (known as the Quality Guru), who has become synonymous with “The Toyota Way.”

Despite a massive earthquake and subsequent tsunami that tempered Japanese GDP, both Toyota and Honda have maintained their No. 1 and No. 2 rankings just in front of, Ford in this year’s study on automaker buyer-supplier relations put out by Planning Perspectives.

Perhaps most impressive, however, is Honda and Toyota’s enduring strength in relative position given the fact that Honda lost most of its earnings in North America during 2008 and 2009; and Toyota sales tanked, according to an interview recently conducted with Dr. John Henke, president of Planning Perspectives and a professor at Oakland University, as well as author of the  12th Annual North American Automotive OEM-Tier 1 Supplier Working Relations Index® Study.

Both Toyota and Honda slipped in the study because the tsunami forced the suppliers to do everything they could to keep production moving. “They became a little more adversarial. Engineers were less willing to collaborate…that kind of action was exacerbated during the tsunami with newer people on board so they weren’t doing things ‘the Toyota way,’” Henke said.

In addition, these two OEMs have continued to slip in the rankings because all of their training for new personnel hasn’t taken effect.

We asked Henke to comment on the potential impact of the new CAFE and safety standards on working relations.

“Some will do very well as a result of these circumstances – not because they have widely divergent supply bases (there are a lot of common suppliers) but it is going to be the way that these OEMs handle these situations,” said Henke. He continued, “Those OEMs that work most closely with these suppliers will be better off.”

Henke also mentioned that those suppliers left that survived the recession will also have stronger negotiating positions with the OEMs. By necessity, according to Henke, the industry will move toward better supplier relations and as the OEMs really start to rationalize their supply bases, this will force tighter relationships. “In the future, supply chains will compete against supply chains,” he said. 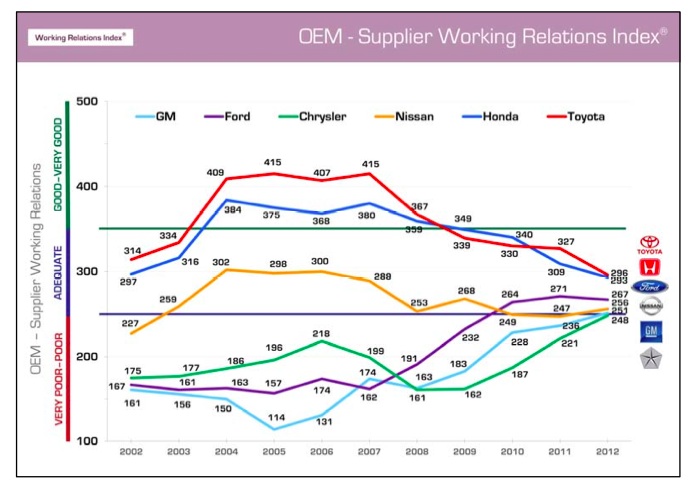 What About the Big Three?

Ford has flat-lined, according to Henke, primarily because it had a change in leadership within the purchasing organization and lost a little of their focus. In general, he said, Ford and Chrysler “need to get their buyers acting more collaboratively” while GM appears to be “working more in lockstep in building stronger relations.”

For all the talk of collaborative relations and the importance of tighter relationships, Henke pointed to the bottom line: “The OEMs that work most collaboratively with suppliers receive price concessions over the previous year that are 14% greater than those that had bad relations.” That equates to billions of dollars in differences, according to Henke.

So why don’t all of the OEMs move toward better relations? “Sometimes it’s just easier to be nasty,” he said.