With Low Aluminum Prices, Where Are Chinese Capacity Closures?

Widespread expectations that rising power costs and a falling aluminum price would force smelter closures and hence support the price have so far proved ill-founded.

Power costs have remained high, even though oil prices have come off a little, and smelters (particularly in China) were estimated to be below the cost curve as the primary ingot price fell below about $2100-2200 per metric ton; this is a position supported by Aluminum Corp. of China (Chinalco)’s quarterly loss of $173 million, prompting the firm to project a first half 2012 loss, according to reports in Reuters.

Rather than smelter closures, the low prices seem to be driving a move from east to west in China. Older smelters in more expensive eastern provinces are being closed as new ones in western provinces are opening to take advantage of lower-cost coal and hence power rates. 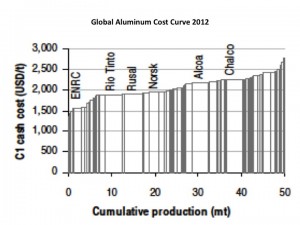 Rather than China, LME prices now flirting with US$2,000 per metric ton and lower are driving further closures elsewhere. After announcing a dismal first quarter net profit figure of just $74 million compared to $451 million last year, an 84 percent fall, the world’s largest primary aluminum producer Rusal advised it would be likely to idle 300,000 to 600,000 tons of capacity in the second half.

Rusal’s position is not helped by nearly $12 billion of debt carried over from the disastrous purchase of a 25% stake in Norilsk Nickel four years ago, but the firm blames the low aluminum price for its woes. Rusal’s share price continues its downward trend, now at less than half the HK$10.80 value the firm’s IPO achieved in 2010.

Only Alcoa is doing well, one might say blessed with a far greater share of revenues from higher value-add production, but that suggests it is by chance, when in fact Alcoa has long held a strategic focus on high technology manufacturing development. Alcoa has bucked the trend and posted a surprisingly upbeat set of results recently having taken the pain of plant closures in 2009-2011.

Indeed, rather than curtail production in China, HSBC expects capacity to increase further over coming years. In the bank’s most recent quarterly report, they are predicting both capacity and actual production will continue to rise as this graph taken from their data illustrates. 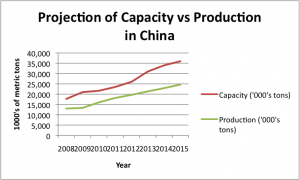 What this graph also illustrates is the shockingly low utilization rates in China; currently about 75% compared to consistently over 90% in the rest of the world.

With aluminum prices now so low (relatively speaking), it may be only a matter of time before further Western-world plant closures are announced. Certainly the new Middle Eastern smelters are running profitably at these numbers and probably so to are Indian smelters.

If the Chinese won’t play ball, it may take yet further weakness before suppliers begin to crack.