I can’t speak for all Chicagoans, but I have always enjoyed Cloud Gate, or “The Bean,” a stainless steel structure that has graced our city landscape for six years now and provided some clever photo opportunities.

To me, it is engaging and playful — a mirrored cultural marvel that distorts, pools, and paints our city skyline in a way that no other structure has done before. Plus, the metal nerd in me appreciates that it is a 110-ton elliptical sculpture forged from 168 seamless stainless steel plates and polished to perfection so there are no visible seams on the exterior. 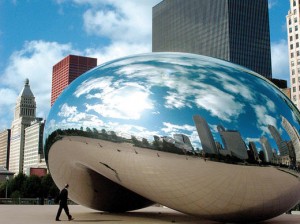 Anish Kapoor, Turner Prize-winning artist, designed Chicago’s Cloud Gate. Now, on to bigger and better things, Kapoor (along with Sri Lanka-born designer Cecil Balmond) has created another spectacle for the world to contemplate: the Orbit. 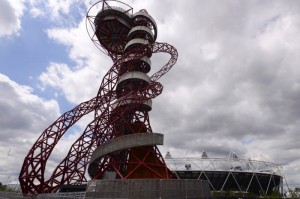 MetalMiner discussed plans for the structure in length back in April of 2010. Already a controversial structure in initial planning, now that it has been built and revealed, people are continuing to talk.

According to a recent article in Reuters, “[the] 22 million pound ($35.41 million) tower, or orbit, is Britain’s biggest piece of public art, and some critics have said it is a waste of money at a time when the country faces severe spending cuts and has just returned to recession.”

To those critics, Kapoor noted, “that Britons would grow to love his spiraling red tower on London’s Olympic Park, just as people had come to appreciate other structures initially loathed, including the Eiffel Tower.”

In the meantime, let’s chat metal. No matter what one’s view of the structure is, it is pretty clear that it was a great achievement for ArcelorMittal, the world’s largest steel manufacturer that covered the bulk of the cost of the structure, including 2,000 metric tons of steel.

The steel, which is 60-percent recycled material, was produced by ArcelorMittal’s steel plant in Esch Belval, Luxembourg. Jean-Michel Dengler, CEO of the plant, described the chosen metal (on the company’s site):

“We’ve used recycled steel from a mix of sources – the automotive industry, demolitions, everything is present. In the mix we have been able to achieve the technical properties the designers asked for. That includes a 355-yield strength, which can withstand a lot of weight, and steel that can behave the same at temperatures of -20C.”

Reuters notes, “[the] structure, which has a viewing gallery, will be handed over to the London Legacy Development Corporation, the body responsible for the Park in legacy, later this month and will be open to the public during the Games, which start on July 27.

It will then re-open in 2014 after the Park has been transformed from a sporting to a living area with new neighbourhoods and landscaping.”

Feel free to comment here on what you feel it looks like. I can see a gumball machine or the Rod of Asclepius.